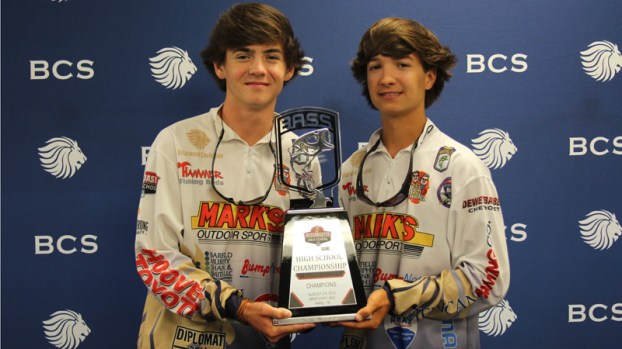 “None of us would have ever believed this could even be possible,” Briarwood Athletics Director and Bass Team Coach Jay Mathews said.

Hank Weldon with BASS presented the national championship trophy to Morris, Smith and Russell, and their parents were recognized for their contributions to the team’s success.

The tournament included anglers from 256 institutions and 337 boats, Weldon said.

“It was a very, very tough field that these guys triumphed through,” he said.

Russell and Smith reeled in an 18-pound, 9-ounce limit of five bass in the final round to win the championship with a three-day total of 50 pounds, 2 ounces.

The won by about 10 pounds but said they avoided updates on the final day and did not know they were the likely winners until they pulled in to the weigh-in.

“We had no idea what other boats had caught,” Smith said. “We were blown away to win it.”

The team had discovered a creek that proved to produce big fish, but as the lake’s water level dropped each day, they had to drive the boat through about 2 feet of water to reach the spot on the final day.

“We decided to run over and hope we didn’t hit anything,” Morris said. “It was pretty scary.”

Smith tossed a chatterbait in the front of the boat, and Morris followed with a jig, they said.

For Russell, a 2016 Briarwood graduate, the win was redemption after he competed in the tournament at the same lake as a high school junior but did not make the cut.

“For it to turn out the way it did was very rewarding,” Russell said.

Russell’s contributions as boat captain, which are similar to a coach, are an example of former Briarwood Bass Team members who have graduated coming back to support the program, Mathews said.

The event at the school was also an opportunity to build excitement for the upcoming Winning Edges video series to be released by the program.

A trailer was shown for the series, which will feature Briarwood Bass Team members in action.