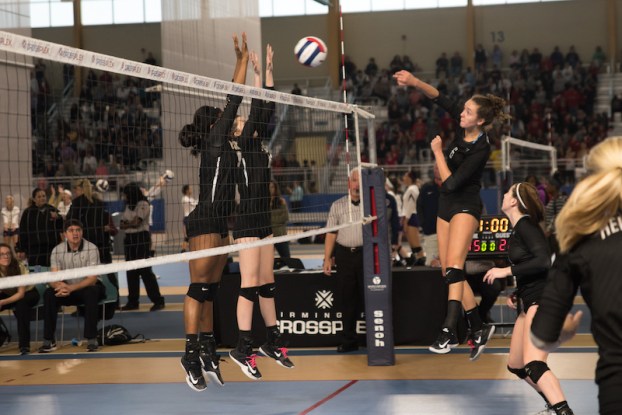 Helena made it to the Elite Eight last year, but now returns a strong cast of seniors in 2018 and hopes to take it a step further and compete for a state championship. (File)

The Helena Huskies’ volleyball team is coming off a season in which its only losses in the playoffs were to two Final Four teams, Daphne and Jasper, after falling to Jasper in the Elite Eight, who went on to play for the Class 6A state championship.

This year, the Huskies are hoping to duplicate that success of getting back to the Elite Eight, but then hope to take the next step by advancing to the Final Four, and with one of the most mature and experienced teams in the state.

“The experience and leadership is great,” head coach Amanda Lewis said. “I’m not sure we even have one leader for everyone to look up to because the team in general is just full of them.”

The reason for that comfort in her players’ ability to lead is due to the seniority on the team, as the Huskies will welcome back close to 10 seniors, several of who are returnees and two of who are transfers.

“We have a ton of interest at every level of volleyball in Helena,” Lewis said. “So I always tend to have close to six seniors on the team each year. There may not be a whole lot of court experience with this group, but we like where we are.”

It’s created a lofty expectation for the players, who want to make sure to live up to the hype.

“If you have nine seniors, on paper you’re supposed to be one of the best teams around,” Emma Johnson said. “That’s a lot of pressure for our class, but something we want to try and live up to.”

That’s a sentiment that several other players agreed with, saying they wanted to put the work in to not end the season anywhere but their ultimate goal.

It’s always going to be a difficult task for the Huskies, simply due to the difficult region they compete in. Last year, the Chelsea Hornets won 30-plus games and didn’t even make the playoffs, while Pelham went on to win the Class 6A state championship.

Now, the region will also feature another playoff team in the Calera Eagles after the most recent reclassification, who were also a playoff team last season.

“With the caliber of the teams that are in our area, it’s going to be a dog fight no matter who we are playing,” Lewis said. “Just seeing those teams in area play helps us get going. It sets the tone for where we want to be the rest of the season.”

Lewis said in order to compete in that area, there is plenty of work to be done and wants her team to up the tempo of each game this year. She said that is something the team works on every day at practice.

When she mentioned that, several of her players chuckled and reiterated that her practices have been tough, but they know it’s something that is preparing them for a special run in 2018.

By GRAHAM BROOKS / Staff Writer HELENA–Young girls interested in learning more about the game of basketball won’t have to... read more