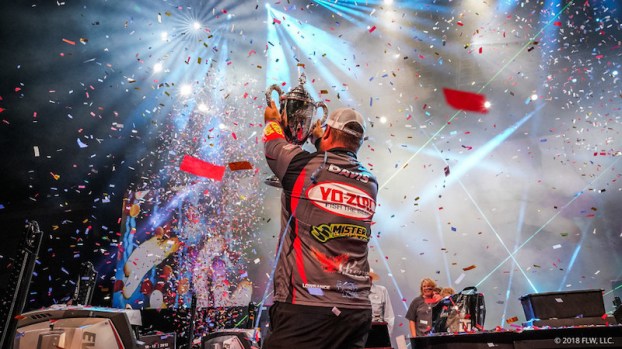 “I don’t believe that I just won this,” said Davis, a former FLW College Fishing standout for the University of Montevallo. “I almost walked away from professional bass fishing last year. I was burned out on fishing. I sold all of my gear – my boat, all of my rods, my reels, every piece of equipment that I had. It wasn’t from failure; it was because I was burned out.

“(FLW Tour Senior Tournament Director) Bill Taylor called me in November and asked me if I was interested in rejoining the Tour,” Davis continued. “I decided to pay my deposits, but I was still on the fence. I decided that if I wasn’t fired up to go fishing by the time the season started, I would forfeit my deposits and go to work at the power company. But, I started getting the itch back around Christmas time and I decided I was going to get back out and just have fun, again. That’s what fishing is all about, it’s supposed to be fun.”

Davis’ decision to rejoin the Tour was definitely the correct one, as the Montevallo-native went on to finish the season ranked No. 25 in the Angler of the Year race – his best finish on Tour since his rookie season. He cashed checks totaling more than $62,000 in seven events and qualified for his third Forrest Wood Cup appearance.

“I knew that the only way that I was going to win this week was fishing brush piles,” Davis said. “There are so many ways to catch fish on this lake, but if it was going to happen for me it was going to be offshore, fishing out of the brush.

“My key bait that I caught all of my big ones on was a 12-inch, plum-colored Mister Twister Mag Buzz Worm. I was fishing anywhere from 22 to 30 feet deep throughout the week. The best anglers in the world were in this tournament and I knew that my only shot was fishing my strengths.

While Davis came out on top, it wasn’t an easy task.

“I fished awful all week, losing fish, but I caught enough to squeak into the top-10 by 1 ounce,” he said. “I’m not supposed to win coming out in 10th place, so I went out today and just had fun. I had an incredible day on the water today and finally got lucky, catching my 5-pound kicker. I guess it was just my time.”

Full results for the entire field can be found at FLWFishing.com.

Overall there were 36 bass weighing 67 pounds, 9 ounces caught by pros Sunday. Five of the final 10 anglers weighed in five-bass limits.

The tournament was hosted by Arkansas Department of Parks and Tourism and Visit Hot Springs. Total attendance for the three-day event was 66,293. The Bank OZK Arena was at 100-percent capacity, Sunday, and an overflow of fans watched the Justin Moore concert and final weigh-ins on a big screen at the Hot Springs Convention Center.

FLW, in conjunction with Visit Hot Springs and the Arkansas Department of Parks and Tourism, announced Saturday that for the first time in the 24-year history of the FLW Tour, Lake Ouachita and Hot Springs, Arkansas, will also be hosting the 2019 FLW Cup, the world championship of bass fishing – Aug. 11-13, 2019. This event will mark the fifth time that the FLW Cup, the sport’s richest prize, has visited Lake Ouachita.