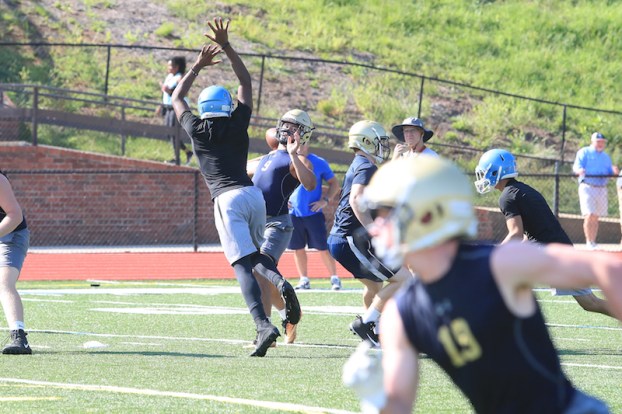 Briarwood's J.R. Tran-Reno is moving to quarterback for his senior season and will be key in the Lions' success this season. (File)

Last year, the Briarwood Christian Lions got redemption early in the season when they shut down Wenonah 34-0, who beat the Lions 14-8 a year earlier in the semifinals of the playoffs to prevent a trip to the state championship.

That win in 2017 was part of 14, as Briarwood finished the regular season a perfect 10-0 and went on to win four straight playoff games before losing to St. Paul’s Episcopal School in the state championship game by a final of 17-14.

While it felt good to get over the hump and get to the state championship game, the Lions were ultimately disappointed in losing the heartbreaking title game in the final two minutes.

Now in 2018, they are hoping to have another redemption path that ends with them holding the Blue Map trophy at the end of the season inside of Auburn’s Jordan-Hare Stadium.

Briarwood will lose players like Michael Hiers, Carson Eddy, Hudson Hartsfield and Garrett Bell, which were some of the best players in the state last year.

While those stellar athletes are gone, there will be plenty of talent returning and other guys ready to step into important roles, starting with athlete J.R. Tran-Reno.

Tran-Reno has been dubbed as a running back the last two years at Briarwood, spending time at receiver as well, and he has taken off as one of the most talented players in the state.

Now, the Vanderbilt commit will make a position change to quarterback for his senior season looking to replace the production of Hiers, who threw for 2,569 yards and 20 touchdowns last year.

In middle school, and during his first year of high school, Tran-Reno was a quarterback, and has practiced at the position the last two years on varsity giving head coach Fred Yancey complete faith in the transition.

It also helps that the Lions will have back a junior running back in Luke Prewett who has established himself as an every-down type of back. As a sophomore, Prewett totaled 694 yards and eight touchdowns as the backup to Tran-Reno.

Receiver, however, is going to be the key position on offense for the Lions. With the loss of Eddy and Hartsfield, Briarwood is having to replace more than 1,500 receiving yards, which is a lot of production.

While Tran-Reno will be a mobile quarterback that can break free on any given play, he wants to be able to throw the ball. His two best options are likely to be Reid Mays and Bryce Perrien, both of whom are expected to step up during their senior seasons. Jay Kynerd and Blake McKenna will also have their chances to make plays.

Up front on offense, the Lions have a good cast returning with a lot of size. While they lose Bell, they’ll have an entire line of players standing at 6-foot-3, with a lot of ability.

Trent Howard, who already has an offer from UAB, will be the anchor of the line this year, while Ian Davis, Ross Godbehere, Noah Whatley and Landon Burg will all make this cast one of the strongest on the team.

Just like the offensive line, the defensive line lose a big playmaker in Patrick Blythe, but it will also get back its leader in Dalton Brooks, who had 49 tackles, 6.5 sacks and 3.5 tackles for loss last year.

They’ll also have Parker Will, Cole Garner, Colin Dorrill, Cole Scordino and Turner Murphy helping out on the line throughout the season.

Mark Hand will be back to lead the linebacking unit this year after finishing second on the team in tackles with 132 two years ago and leading the team with 74 tackles last year. Joining him will be Matthew McKenna, Cal Reebals and Luke Hand.

The secondary is going to take the biggest blow of any position this year. Like receiver, the Lions will lose their two best players at the position in Andrew Sherrod and Carson Donnelly and will take a combined 113 tackles, 19.5 tackles for loss, 20 pass breakups and five interceptions with them.

Cade Dickinson, Sam Hamner and Cade Mango will all be important impact players, while Chipper Jones and Cal Higdon will provide some help as well.

Prediction: The Lions are one of the few teams where it’s not up in the air whether they’ll make the playoffs, but instead if they’ll win their third consecutive region championship. Ramsay is a legitimate threat to that after winning the state championship in Class 6A two years ago and finishing second in its 6A region last year, before stepping back down into the 5A ranks this year. If Briarwood wins the region, it will compete for another state championship. It all comes down to how Tran-Reno handles the quarterback position and if any receivers step up because the team around them is stacked. My guess for their regular season is 8-2, but this is a team that has only lost three combined games in the last two years.

By GRAHAM BROOKS / Staff Writer HELENA–Ten days is all that remains before the start of another Helena High School... read more