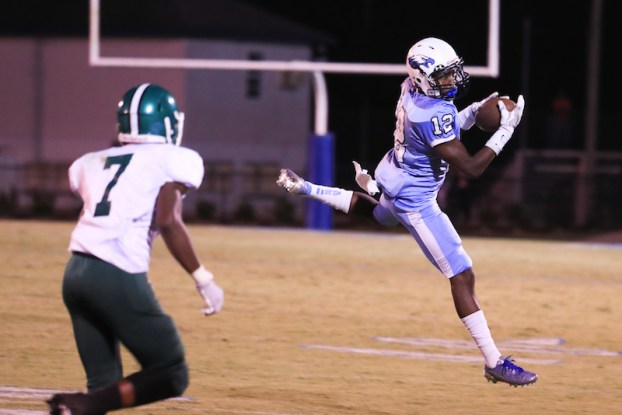 Quindarius Crews, above, is one of four receivers back on this year's team for quarterback Cornelius Brown to throw to, which should create for an exciting offense. (File)

One of the biggest topics going into the 2018 football season is whether or not the Calera Eagles can handle a jump from Class 5A into the most difficult Class 6A region featuring teams like Benjamin Russell, Opelika and Wetumpka.

With the school growing each year, they definitely won’t be back down in the 5A classification, meaning this is a year for them to build for the future and see what it is going to take moving forward to compete with some of the best teams in the state.

Good news, the Eagles will return one of the strongest cast of players not just in Shelby County, but in the state. So what it really boils down to for their team is to be bought in for each other, not compete for themselves and stay healthy.

A few guys will possibly have to play on both sides of the ball, but if this team can play for each other and stay healthy, with the talent they have, they’ll be just fine. In 5A, Calera would have been a state championship contender, so they can’t let the jump up change that mindset.

It will help to have a good leader at quarterback and that’s exactly what Calera has with the return of All-County First Team and All-State Second Team quarterback Cornelius Brown.

Brown finished last season with 2,334 yards and 25 touchdowns and stands at 6-foot-5, 180 pounds. With every receiver back on this year’s roster as well, he is poised for another strong season at the position.

While the Eagles won’t have a ton of depth at running back, Tyler Agnew is back and very capable of carrying the load. They’ll lose Dee Mickens, who totaled 825 yards and 12 touchdowns last year, but Agnew flashed some brilliant running ability as a backup on his way to 432 yards and seven touchdowns on just 42 rushing attempts.

The excitement on offense continues at the receiver position with the return of Quindarius Crews, Tyler Ray, Dee Woodson and Chandler Smith, all of whom had at least 220 receiving yards last season, and three of whom had 530-plus receiving yards.

With a quarterback as talented as Brown having four guys he trusts for the second consecutive year, this offense could be very dangerous and explosive.

There will be some depth issues on the team and it starts at offensive line for the Eagles. That being said, they have a strong core cast back.

Jayson Jones, an Alabama commit at defensive tackle, as well as Ryan Caver and Gabe Schweitzer will all be back to anchor the line. Logan Wyatt, Cameron Rogers and Trey Yowe will also be strong bodies on the line.

All of those guys will play on the defensive line as well with Jones being the anchor, while William Sims and Markell Kelley will also have important roles at the position.

The Eagles will lose their leading tackler from a season ago with the departure of linebacker Dyson Edwards, who totaled 94 tackles last season.

Back at linebacker, however, is an exciting player in O.J. Harris, who is their best sized linebacker at 6-foot-1, 225 pounds. He brings back 13 tackles for loss. Harris will be joined by Morgan Clinton, T.J. Gilbert, Elija Jemison and Jonah Lee.

With Trent Yowe and Terry Burrells both back, the secondary is one of the most exciting positions on the defensive side of the ball for this year’s team.

Prediction: Game one of the season against the Pelham Panthers will tell us a lot about the Calera Eagles. That will be a good staple to see how they handle a difficult schedule filled with 6A teams. Although Wetumpka recently lost its starting quarterback for the year, they’ll be a strong favorite in a difficult region, along with Opelika and Benjamin Russell. Behind that, the Eagles will battle with Stanhope Elmore and Selma for the fourth and final playoff spot in the region.

With wins over Benjamin Russell and Wetumpka, who made it to the state championship game last year, this is a Calera team that could finish second in the region, but with it being their first year in the classification, third or fourth seems more realistic. They definitely have too much talent to miss the playoffs, but I see a realistic record of 6-4 or 7-3 during the regular season this year. Start with a win against Pelham, and that prediction can change quickly.