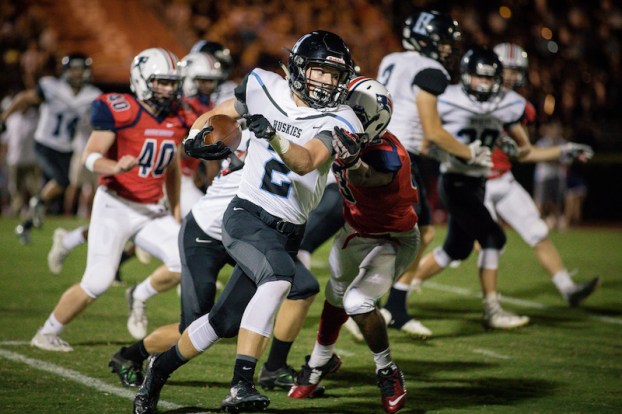 Riley Marks will be one of the leaders for this year’s Helena football team that is looking for a big improvement under first-year head coach Richie Busby. (File)

It may take a little bit of time for Helena to get going under new head coach Richie Busby, but there is no doubt the Huskies got the right man for the job.

After a five-year stent as head coach at Fultondale, Busby brings an overall record of 40-17 to Helena, as well as five consecutive playoff berths and his most successful season at the helm in 2017, an 11-1 school-record season.

But to go from a 1-9 season to a good football team takes a lot of talent as well. The Huskies are unproven in that category right now, but will have the chance to prove themselves throughout the 2018 football season.

The most confident part of the team, or at least on offense, will be quarterback Luke Stamba returning to lead the offensive side of the ball. Stamba came in last year for an injured Lawson Peoples and flashed some excellent playmaking ability.

Running backs Daunte Cave, Marquise Johnson and Jack Gay will be a three-headed monster this year for the Huskies in the backfield. Cave should be the starter, but all three will be athletic playmakers ready to make a name for themselves.

Funny enough, receiver is where Helena will lose the most talent this year, but it might be one of the most exciting position for the Huskies. With the departures of Justin Stuckey and Dionte Tolbert, they’ll lose a lot of production, but Ladarrius Rice, Riley Marks, Matthew Hobbic, Caleb Owens, Jaden Jackson, Chris Miller and Kenneth Jones are all guys that can make a play on the ball.

Busby said they will play 6-7 of those receivers each week with Rice being the go-to target.

On the offensive line, Sam Regina, Chase Perry, Jamie Purkaphile, Seaborn Hines and Mack Shannon will look to make this offense go. Busby knows that this unit is one of the most important to his team’s success.

Switching over to the defensive side of the ball, the defensive line will be headed by Ethan Trimm, Reese Davis, Jonathan Williams, Chase Holmes and Matthew Ray. Davis and Trimm will anchor each end of the line, while the others will be on the interior.

Linebacker will be the most trustworthy unit on defense this season thanks to three solid returnees in Cole Pugh, Nathan Dunaway and Tucker Night.

Busby is high on all three of those players, while three younger players will back up those juniors and have the chance to learn how to lead.

In the secondary, Jake Schmidt, Zach Goodwin and Brodie Jones will all take on a roll at safety looking to eliminate deep threats. Ryan Lewis, a senior, will be the leader at cornerback and will be joined by Matt Mizerany and Chase Smith as well as others from the offensive side of the ball.

Prediction: While they lose teams such as Benjamin Russell, Opelika and Wetumpka from their region this year and the schedule will be slightly easier, there are still no definite wins. Homewood and Pelham seem to be the top two teams in the region this year, while the Huskies will battle with Chelsea, Minor, Carver and Jackson-Olin for one of the final two playoff spots. All of those games will be tossups for each team, which could create for a crazy tie-breaking scenario at the end of the season, but I still think the Huskies are a year or two away from really settling in under Busby.

By GRAHAM BROOKS / Staff Writer HELENA–Ten days is all that remains before the start of another Helena High School... read more