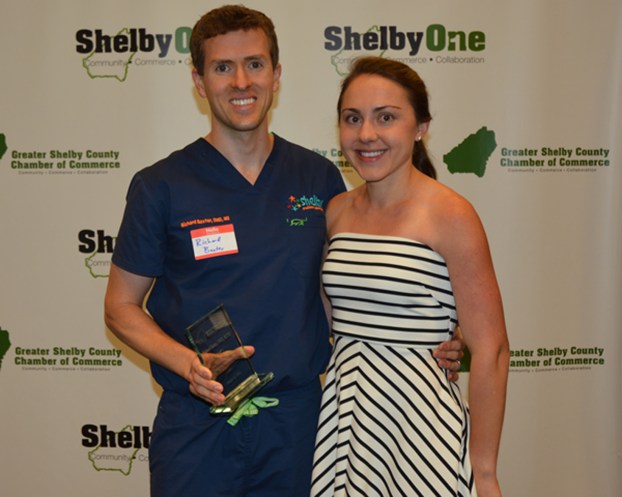 Dr. Richard Baxter is pictured with his wife, Tara, when he was named the 2016 Health Care Professional of the Year by the Greater Shelby County Chamber of Commerce. (File)

PELHAM – Local dentist Richard Baxter recently added author to his already impressive resume with the publication of “Tongue Tied: How a tiny string under the tongue impacts, nursing, speech, feeding, and more.”

A tongue tie occurs when the string under the tongue is too tight or too thick. Baxter, owner of Shelby Pediatric Dentistry, treats tongue ties at the Alabama Tongue Tie Center, which is his second business that’s attached to his dentistry facility.

The book explores the impacts of tongue ties from various perspectives. Baxter partnered with seven other people to provide readers with a complete scope of the issue. Baxter said the book was written for parents and health care providers of all kinds. An audio version of the book is slated to be released this year also.

“This is the first book of its kind,” he said. “It’s a multidisciplinary book that can be useful to a wide variety of people.”

Tongue ties affect 10-20 percent of the population, however, Baxter said most people don’t realize they have it. In babies, it can cause problems with breastfeeding. It can also cause speech delays, trouble eating, difficulty chewing foods and choking or gagging on foods.

Tongue tie removal takes about 10-15 minutes and does not require a child to go under general anesthesia. The Light Scalpel CO2 laser he uses to perform the procedure causes minimal bleeding and most nursing babies can latch and nurse right away, he said.

In addition to the work he does locally, he has traveled to places like Cambodia, Uganda, India and Myanmar on mission trips to install water wells, biosand water filters and more. Because residents in developing countries often don’t have access to dentists, he has also taught about 30 pastors how to extract teeth.

Baxter’s book can be purchased on Amazon.

PELHAM – More than 3,200 Pelham City Schools students headed back to the classroom on Thursday, Aug. 9, for another... read more