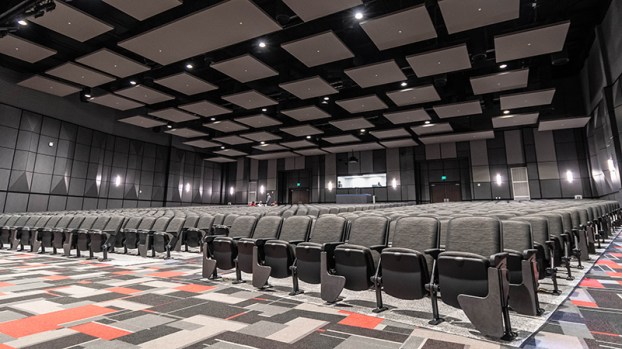 The auditorium at the new Thompson High School will host the Miss Alabama Outstanding Teen pageant in March 2019 after the Alabaster City Council agreed to support the pageant during an Aug. 13 meeting. (Reporter Photo/Neal Wagner)

ALABASTER – One of the largest preliminary events for the Miss Alabama pageant will be coming to Alabaster in 2019, after the City Council agreed to provide support for the event during an Aug. 13 meeting.

Council members voted unanimously during the meeting to provide $3,500 and supply lunch for the pageant participants and volunteers for the 2019 Miss Alabama Outstanding Teen pageant, which will be held from March 1-3, 2019.

The pageant has been held in Sylacauga for the past 16 years, but has outgrown its space there, particularly with regard to hotel rooms and restaurants, pageant organizer Anita Walker told council members during an Aug. 9 work session.

“Sylacauga has been great to us, but we’ve just outgrown it,” Walker said.

The 2019 pageant will be held in the auditorium of the new Thompson High School, which will provide more space and better access to amenities such as hotels and restaurants for those who attend the pageant, Walker said.

The Alabaster Board of Education previously agreed to host the event at the new THS.

The pageant will consist of three shows throughout the weekend, and typically includes between 40 and 50 contestants and an additional 50 rising stars from throughout the state. The three-day event usually draws between 800 and 850 people, Walker said.

The Miss Alabama Outstanding Teen pageant is one of the largest scholarship-awarding events in the state for teens, and serves as a preliminary to the Miss Alabama pageant, and ultimately the Miss America pageant.

City Council members said hosting the pageant will draw a large number of people to the city, and will provide sizeable support for area businesses.