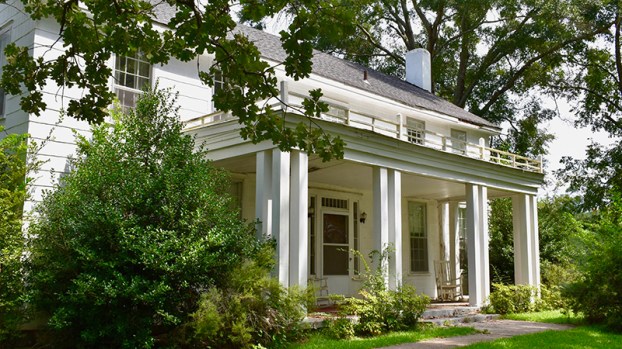 The Mahler house is the two-story antebellum farmhouse on the 167-acre farm that comprises Shoal Creek Park. The house and land were a bequest to the city from Elizabeth Mahler. (Contributed)

MONTEVALLO – The Perry Mahler House, a bequest to Montevallo that is the centerpiece of Shoal Creek Park on Alabama 119, sits precariously at the center of a battle about the future use of the historic structure.

On one side is the Montevallo Historical Commission led by Janice Seaman.  The MHC wants first to save the 1834 structure, and then to restore it in an historically accurate manner with its eventually becoming a city museum. The commission is a board appointed by the City Council.

On the other side stands the Montevallo Development Cooperative District, a coalition of the city, the county and the University of Montevallo, represented by Dee Woodham. That group also wants to repair the deteriorating structure — for occupation by a Shoal Creek Park caretaker.

Both women pitched their positions to the Montevallo City Council at its Aug. 13 meeting, with no clear-cut victor, although Woodham’s team looks to be leading in early rounds.

The City Council voted 5-1 to launch Woodham’s plan to a limited extent—with the understanding that the idea of a caretaker remains unsettled. Rusty Nix voted “no.”

Seaman had wanted the historical commission to guide the restoration process, working with contractors experienced in historical preservation. The home’s present condition is “deplorable,” she said.

“The county has no experience in historic preservation,” Seaman said. The home and park came to the city as a bequest from Elizabeth Mahler, who lived all her life on the 167-acre farm on Alabama 119.

Seaman gave the council copies of an email from Gary Muehlbauer, representing the Mahler estate, in which he recommended that the Mahler house restoration “be placed under the direction of the Historical Commission.”

Woodham’s presentation included the county’s granting $100,000 for a wooden foot bridge over Shoal Creek and for development of a two-mile walking trail through the property. The MDCD is to provide $60,000 in matching funds for the work.

That project is separate from repairs to the house, Woodham said. For that work, Miss Mahler’s estate set aside $300,000 to “preserve the old Mahler home place” . . . “for the purpose of enjoyment and usage” of Montevallo and its residents.

Woodham said the county would charge $12,000 to supervise the repair work with the goal of installing a caretaker.  That’s how county parks operate, she said, with the caretaker doing routine maintenance, such as cleaning bathrooms.

Mayor Hollie Cost said the advantage of county oversight is familiarity with government contracts and with the bid process. “We have had a lot of success working with the county,” she said.

Seaman did score an important point by persuading the five City Council members to vote to nominate the house for the National Register of Historic Places.  The mayor voted “no,” saying she wanted more time to consider the issue “until we know what we’re doing with the house.”

By GRAHAM BROOKS / Staff Writer Deputies with the Shelby County Sheriff’s Office are investigating a death near the 4000... read more