COLUMBIANA – A 24-year-old Montevallo woman will spend the next several months in prison after she pleaded guilty recently to distributing methamphetamine at a residence near a local middle school earlier this year. 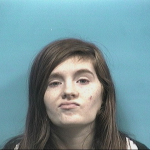 Kateland Michelle Hughes, who lists an address on Blue Loop in Montevallo, pleaded guilty to one felony count of distribution of a controlled substance during a June 28 hearing in front of Shelby County Circuit Court Judge Daniel Crowson.

As a result of Hughes’ guilty plea, Crowson originally sentenced her to six years in prison, but split the sentence to eight months in prison followed by two years of supervised probation. Hughes received 208 days of jail credit, and must surrender her driver’s license for suspension.

The Shelby County Drug Enforcement Task Force arrested Hughes on Jan. 22 and charged her with one felony count of unlawful distribution of a controlled substance.

When she was arrested by the Task Force, Hughes was on probation for a first-degree theft of property charge brought against her by the Montevallo Police Department in 2017. In the theft of property case, Hughes allegedly stole more than $33,000 from the Huddle House restaurant between June 2015 and January 2016.