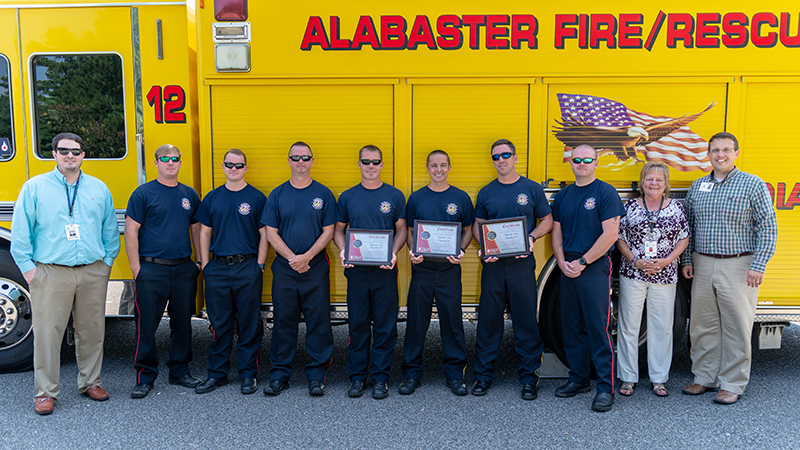 ALABASTER – Alabaster’s police and firefighters now have more tools to use when responding to calls involving individuals with dementia, as the department recently became the most recent agency in Shelby County to be certified as a “dementia-friendly department” by the Middle Alabama Area Agency on Aging.

From Aug. 21-23, all Alabaster firefighters received training from the M4A on proper procedures for working with dementia patients, and how to refer patients and their families to resources M4A offers for the community. AFD joins the Alabaster Police Department in receiving the certification, as the APD completed the program earlier this year.

“It’s a big deal for a department to earn this designation,” M4A Development and Marketing Director Robyn James said after wrapping up the final day of training at the department on Aug. 23. “We’ve heard horror stories elsewhere in the nation where agencies were not trained on how to handle those situations, and the outcome was not positive. We are working to provide first responders with the tools they need to provide help to these families.”

During the training sessions, M4A representatives went over best practices when responding to a call involving a dementia patient, and shared how quickly dementia cases are rising across the nation.

M4A representative Jeremy Raines told firefighters there are currently about 5 million individuals in the United States facing age-related cases of dementia, and the number is expected to grow to about 25 million by 2050. Of those cases, about 70 percent are caused by Alzheimer’s disease.

Raines encouraged the first responders to always show empathy when dealing with a dementia patient.

“Just because a person makes a decision that seems strange to us, just remember there is a person in there,” Raines said. “They are not making these decisions on their own. There are parts of their brain that are just no longer living.”

Raines said it’s important for dementia patients to still have access to their social circles, local businesses and other community offerings, and said even patients with severe cases of dementia will often still recognize and trust police offers and firefighters.

When interacting with a dementia patient, Raines encouraged the firefighters to speak calmly and clearly, to ask yes or no questions, to wait 10-15 seconds for a response and to only restrain a patient if it is necessary.

Through the certification, the departments also are able to more easily connect dementia patients and their caregivers with M4A resources, many of which they may not otherwise know about, Raines said.

James said many other agencies in Shelby County, such as the Pelham Fire Department, Harpersville Police Department and Shelby County Sheriff’s Office, in obtaining the M4A certification. M4A also recently received a grant from Cawaco Resource Conservation and Development Council Inc. to expand the training program, she said.

“It has been a great partnership,” James said. “Shelby County has been the leader in the state for developing this training and now expanding it.”