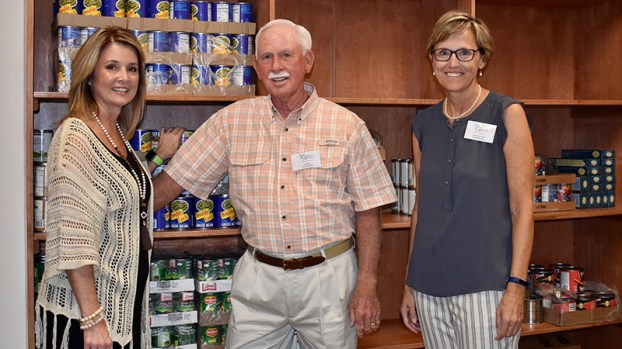 Hughes, the head of Hughes Building Co., was the general contractor for the project that resulted in all the “oohs” and “ahhhs” from the visitors.

“It turned out pretty good, didn’t it?” said Hughes.  He and his subcontractors had ripped out wiring, plumbing, insulation and sheetrock throughout, and they tore out floors in some spots. The result? A spacious and welcoming reception area, practical individual offices (each with at least one window), a kitchen worthy of HGTV and even a side patio (furniture donated by Summer Classics).

Built in 1957 as Bill Lovelady’s home, the 3,800-square-foot single-story brick structure turned out to have a functional layout for SEA use. What once clearly was a spacious living room, for example, now serves as a board room (and as a classroom for the English as a Second Language and GED classes Jackie Ritchie began teaching here Sept. 7).

University Baptist Church once housed a nursery/pre-school program in the house which is next door to the church on Shoshone Street; UBC donated the house to SEA, enabling the agency to expand its reach.

“We have got pretty good at handling crises,” said SEA Director Karen Pendleton. “Now we are moving into prevention and education, too.”

The SEA food pantry–where groceries can be assembled in moments to feed a family for a week–once was a carport and utility room. University of Montevallo Professor Jill Wicknick and her Summer Harvest students devised lists that meet nutritional and caloric needs. The guidelines enable SEA staff to respond quickly to a hungry family’s needs.

“A lot of people don’t realize that 23 percent of their neighbors live below the poverty line,” Pendleton said.

Some are homeless, too. Nick Preston works with those, she said, many of whom live in their cars or “couch surf” between friends and relatives. Food scarcity or homelessness may exacerbate domestic issues, and that brings in Keesha Grimes, the specialist in family counseling.

“Wow! Isn’t this marvelous?” exclaimed Montevallo Mayor Hollie Cost as her tour brought her to the pantry steps (custom-built by Morris).

The kitchen with its deep sinks, sleek white cabinets, smooth countertops and the backsplash of white subway tile will be an active place, Pendleton said, starting with a “Living Well with Diabetes” class taught by Martha McMinn and Michele Pawlik. Plans also include “Homemade 101” for young working mothers. “Often they are so dependent on fast food,” Pendleton said.  The class will offer healthier (but still quick) alternatives, she said.

The kitchen was not in the initial remodel budget, but SEA won a grant from the Shelby County Community Health Foundation. Cawaco Resource, Conservation and Development Council bought the appliances, while Counter Dimensions in Pelham gave SEA hefty discounts. The Community Foundation of Greater Birmingham provided the main $50,000 grant for remodeling, Pendleton said.
“Karen wrote a lot of grants,” said board member Tami Pickett, “and we had help from a lot of volunteers.”

PELHAM – A new fire engine hit the streets of Pelham on Sept. 20, according to Fire Chief Tim Honeycutt.... read more