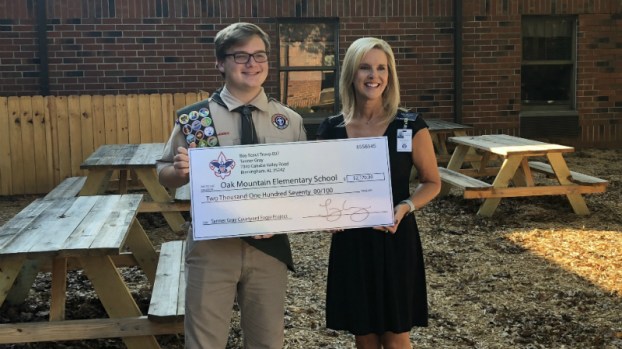 Tanner Gray, left, redesigned a courtyard at Oak Mountain Elementary School and then presented funds left over from the project to OMES Principal Debbie Horton. (CONTRIBUTED)

The project was first suggested by Principal Debbie Horton.

“My wife, Kristy, is a special education aid at the elementary school, and she asked Mrs. Horton for ideas,” said Terry Gray, Tanner’s father. “Mrs. Horton had a passion for the project, and she’s been well-pleased with the end result.”

The redesign entailed removing overgrown Juniper trees and the green metal hardscape, and then pressure-washing the area.

Fencing was installed to shield air conditioning units and pea gravel and mulch was added as groundcover. Finally, picnic tables were built and installed.

Tanner enlisted his grandfather to help with heavy equipment usage, and together they expended some 240 man-hours for the project.

“The courtyard was overgrown which made the area smaller and more dangerous for the students,” Horton said. “What was once an eyesore now has become a vibrant outdoor classroom that our students are proud to use!”

Tanner sent letters to family and friends to raise necessary funds, according to his father. He raised more money than he needed for his project, so he presented the school a check for $2,200 representing the remaining funds on Sept. 5.

Tanner is a member of Boy Scout Troop 007 sponsored by the St. Mark the Evangelist Catholic Church in Birmingham.

The elder Gray said he loved the outdoors while growing up and was drawn to scouting but didn’t finish.

“I encouraged both my sons to finish the program, to earn their Eagle, and I pushed them when they needed it!” he said with a laugh. “Sometimes they needed to get over a hump, but they committed to finish.”

Cooper Gray, 18, now a freshman at Auburn, did improvements at the Veteran’s Memorial in Liberty Park for his Eagle project.

Tanner Gray is thinking about becoming an orthodontic dentist but has several areas of career interest at this time according to his dad.

“I couldn’t be prouder of this young man,” Horton said. “OMES is fortunate that he chose us as the beneficiary of his Eagle Scout project.”