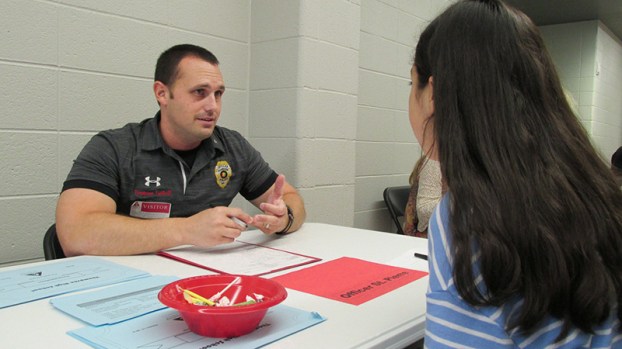 ALABASTER – Taking one’s report card home for the parents to sign used to be one of the most unpleasant rites of passage, but now this isn’t necessarily the case.

“We don’t print report cards and send them home since everything is online now,” said Marsha Roach, interventionist for the Alabaster City Schools. “Sometimes we think parents might not see the grades and talk with their children about doing better, so we’ve added an extra layer of help.”

Thompson High freshmen had brief appointments with mentors on Oct. 16 who looked over their grades and offered guidance and resources for improvement. The mentors will be back the next grading period to continue a relationship with their mentees.

“We had 21 classes today and a total of 511 freshmen,” Roach said. “Each student met a new mentor who talked about improving academically and will hold them to account when they come back in a few weeks.”

Roach said parents were given an opt-out privilege for their children, but no one chose this option on Oct. 16.

“Our mentors today are volunteer community leaders,” Roach said. “The group includes Mayor Handlon, several council members, a minister, a police officer and others who donate their time to help our children.”

Roach said Johns Hopkins University gave a grant to Alabama schools to develop this kind of safety net. Eight schools began the experiment. Roach attended a conference to learn about the mentor program and decided to refine it and bring it to Alabaster.

“This is our fifth year, and we’ve received positive feedback,” she said. “The data says we’ve reduced failures and increased the numbers for A and B honor rolls. It’s been a great success.”

Pat Lozito, director of recruiting and consulting at 12 Stones Staffing and Consulting, said he has mentored all five years.

“I’ve been so excited about this that I convinced my boss to come and help. She’s my wife, so I’m glad we’ve worked together these past two years!” he said with a laugh.

The Lozitos have four children in the Alabaster system and said this is one way they can give back to a community that has done so much for them.

“Many times, I ask the students what advice they’d give to someone in their shoes,” Lozito said.

“They say things like ‘stop playing video games’ and ‘do your homework,’ and I say, ‘that’s right,’ so they just need to hear someone else confirm what they know to be true – and not yell at them,” he added with a smile.

Cathy Lozito agreed that most freshman already know how to improve their academics.

“We have a brief opportunity, up to seven minutes or so, and must ‘cut to the chase’,” she said. “Most of the time if there’s a grade issue it’s not doing homework or not studying for tests. I ask, ‘Are you happy with these grades?’ They say ‘no.’ Then I ask, ‘What are you going to do about it?’ When we come back in a few weeks we’ll check up on how they’re doing.”

Pat Lozito said all mentors take training and know the resources available to the students who need help, including study sessions and tutoring. He said all notes the mentors take are confidential and kept at the school to be brought out at the next grading period to refresh their memories.

Roach said the freshman class is deliberately chosen as a prime age for helpful intervention.

Freshman Carla Bishop said she found the process helpful even though she’s on the A honor roll.

“The people I talked with today were very nice, and they said they were proud of me and to keep up the good work,” she said.