SCSO captain among top law enforcement officers in the world

On Monday, Oct. 8, Shelby County Sheriff’s Captain Clay Hammac, also commander of the Shelby County Drug Enforcement Task Force, was formally recognized in Orlando, Florida, by the International Association of Chiefs of Police as one of law enforcement’s Top 40 under 40 professionals. Hammac was selected from a candidate pool representing more than 32,000 law enforcement officers from 152 different countries. 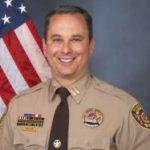 Annually, the IACP recognizes the top 40 law enforcement officers from across the globe under the age of 40 for their devotion to service, compassion to others and sacrificial leadership.
The event was concluded by remarks from President Donald Trump, recognizing the sacrifices made from all law enforcement and their families.
Hammac was nominated for the award by Shelby County Sheriff John Samaniego. The nomination packet spotlighted his faith based work outside of law enforcement, and a number of his career achievements, such as testifying before the U.S. Congressional Financial Services Committee. The nomination included letters of reference from others who identified his quiet compassion toward others and selfless devotion to the spirit of service.
“Captain Hammac is so deserving of this award,” Samaniego said. “He exemplifies the professionalism and hard work of our employees who work tirelessly to serve Shelby County.”
“There are so many others who are well deserving of this award, and to be recognized by my peers and my command staff is an incredible honor that leaves me speechless,” Hammac said.
The other 39 awardees were recognized from Spain, Australia, China, Mexico, Israel, Pakistan, The United Arab Emirates, the United Kingdom, Canada, Columbia and 22 U.S. States.