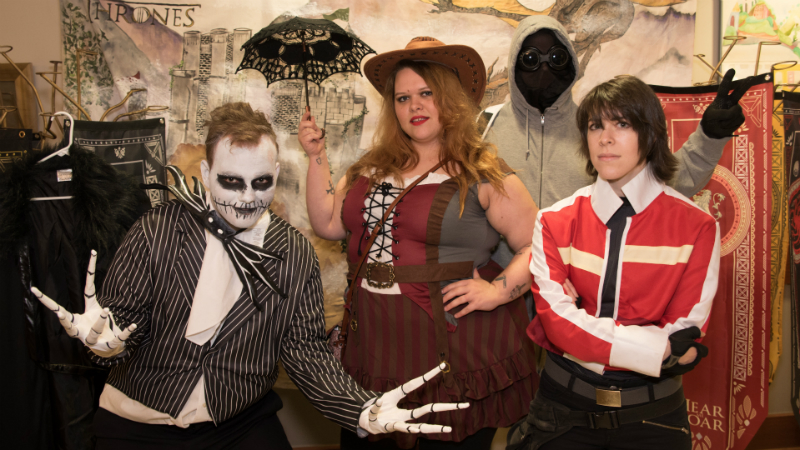 HOOVER – Brave adventurers walked down a dark passage choked with cobwebs, trying to decide whether to draw their weapons or cast a magical spell, while in the room next door, fellow Jefferson State Community College students learned how dragons could have flown and breathed fire.

And this was just one session of the day-long Pioneer Con event at the college’s Shelby-Hoover campus on Wednesday, Oct. 17.

“A celebration of all things geeky,” according to co-founder and English instructor Katie Boyer, Pioneer Con continued to grow in its third edition.

“Our thought is to try to keep it balanced between fun and academics, and give people a chance to geek out in a structured, academic way,” Boyer said.

This year’s Pioneer Con saw the addition of a photo booth for attendees dressed as favorite characters like Han Solo and Jack Sparrow, a performance from Head Over Heels Aerial Silks and a Dungeons & Dragons game referenced above and led by Jeff State English instructor Eugene Cuevas.

The event was free and open to the public, held in the Health Sciences Building from 9:30 a.m. until 4:30 p.m., and guests came and went to sessions that interested them.

“I’ve been pleased to see so much enthusiasm from students and faculty, and from well beyond Jeff State,” Boyer said. “There’s not a single presentation that doesn’t sound fascinating to me.”

North’s lecture, “Write What Only You Know: Five Stories from My Writing Career,” was accompanied by a question-and-answer session and book signing.

Afternoon sessions branched out to presenters from academic worlds beyond Jefferson State. Benton Tyler, chairman of the University of Montevallo’s Game Studies and Design Program, along with several graduate students, discussed “Gaming at a Liberal Arts University.”

Other presenters discussed cosplay and special effects makeup. A trivia game took place over lunch, and guests were invited to attend in costume.

“I sometimes describe Pioneer Con as half Comic Con and half academic conference,” Boyer said. “Our schedule this year really reflects both the educational and the entertaining possibilities of speculative art, literature, and film.”