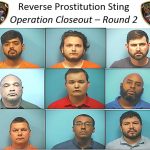 The Shelby County Drug Enforcement Task Force conducted a second sting, titled “Operation Close Out – Round 2” on Thursday, Oct. 18, along the U.S. 280 corridor, according to a press release.

Nine men were arrested and charged with the crime of soliciting prostitution, among other charges.

Those charged are identified as follows:

The first operation took place on Sept. 20, when 11 men were arrested for soliciting prostitution.

This is only the second operation of what is expected to be an ongoing effort throughout Shelby County in the months to come. The motivation behind these efforts is to demonstrate a zero-tolerance for criminal solicitation and to aggressively attack the demand for these type enterprises, which is often rooted in human trafficking and drug trafficking.