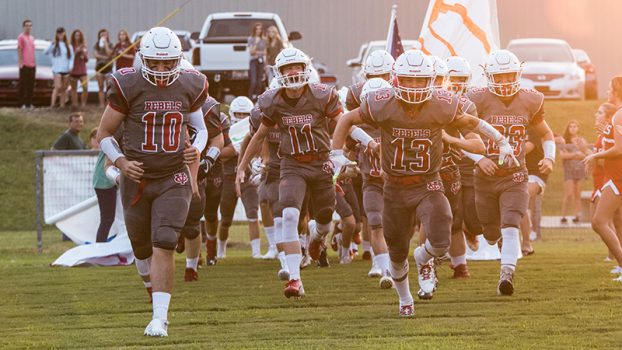 Coosa Valley clinched a spot in the playoffs with a dominant 42-8 victory against Evangel-Montgomery on Friday, Oct. 19. (File)

HARPERSVILLE – Thanks to a 32-19 win against Springwood on Friday, Oct. 12, the Coosa Valley Academy Rebels had a chance to clinch a playoff berth with another home win on Friday, Oct. 19, against a struggling Evangel Christian Academy team.

The Rebels capitalized on the opportunity thanks to another strong rushing performance from Kaleb Allen, who ran for 303 yards last week and added 233 more yards this week, including four touchdowns to bring his combined total to 536 yards over the last two weeks.

Allen’s four touchdowns were part of a six-touchdown night by the Rebels, as they went on to topple Evangel 42-8 to finish region play with a record of 2-3 and make Coosa Valley 3-1 in its last four games.

The game looked good for the Rebels from the start when Allen was able to pick up right where he left off last week.

With the thought of Evangel’s defense honing in on the star running back, there was worry he may be held in check more this week, but to see his first-quarter performance gave you a feel that Evangel was going to have no answer.

Allen put up the first score of the game with a 30-yard touchdown run, followed by a 2-point conversion to put Coosa Valley on top 8-0 in the first quarter.

He added one more touchdown in the quarter on a 1-yard run that put the Rebels up 14-0 at the end of one.

Coosa Valley quickly made it 22-unanswered points to start the second quarter when Brayson Edwards tallied is first touchdown of the game, followed by another 2-point conversion to put the Rebels on top 22-0.

Evangel answered back before the half with its only score of the half to try and gain some momentum, as they made the score 22-6 at the halftime break.

It didn’t take long for the Rebels to add one more to that score in the second half when Allen quickly added his third touchdown run from 3 yards out, before Coosa Valley added its third 2-point conversion of the game to take a 30-6 advantage.

After a safety made it 30-8, Edwards added his second touchdown pass of the game early in the fourth quarter on a 31-yard pass to Reid Maddox that put the Rebels up 36-8. Edwards went on to finish the game 10-of-15 for 157 yards and two touchdowns, as the freshman continues to grow.

Shortly after, Allen closed out the scoring for the night with one last touchdown run, this time from a yard out, to put Coosa Valley up 42-8, which became the final score.

Aside from his powerful two games to lead the Rebels to the playoffs, Allen also surpassed 1,000 yards rushing for the season during the win.

The Rebels will now close out the season with a road game at Southern Academy on Friday, Oct. 26, before the playoffs kick off.

Shelby County unable to rally past Central-Tuscaloosa, will miss playoffs

By CHRIS MEGGINSON | For the Reporter COLUMBIANA – Shelby County put together a high-scoring second half, but was unable... read more