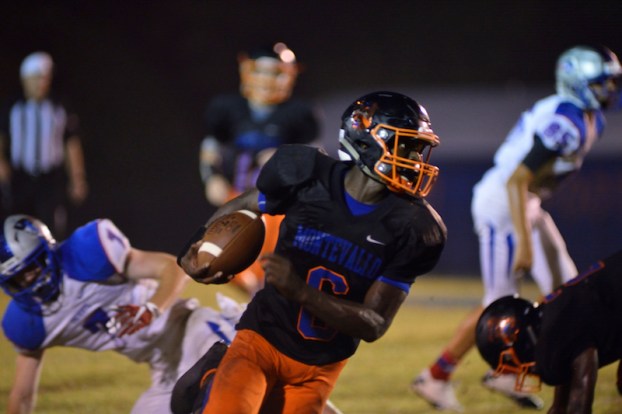 The Montevallo Bulldogs not only locked up a playoff spot on Friday, Oct. 19, but the Bulldogs clinched the No. 2 seed out of their region. (For the Reporter/Larry Dancy)

Montevallo locks up No. 2 seed with win at Sipsey Valley

BUHL – Montevallo overcame a low-scoring, first half deficit to take control of the game in the second half and lock up the No. 2 seed in Class 4A, Region 3 with a 28-21 win at Sipsey Valley on Oct. 19.

“It was a huge win. We knew what was on the line. Sipsey Valley has a great football team. I’m really proud of my guys finding a way to win,” Montevallo head coach Brandon Wilcox said. “One of our goals is to host the first round playoff and being able to do that is huge. We’re sitting right where we want to, we just got to keep improving and fix some of the mistakes we’ve been making.”

The Bulldogs trailed 7-6 at halftime after averaging 52 points a game the previous four weeks.  However, Montevallo came out and shut out Sipsey Valley in the third quarter.

“I think our defense just keeps getting better. Our defense carried us tonight. They did a really good job with our offense struggling putting points on the board like we normally do,” Wilcox said.

The points came in the second half, beginning with an 86-yard touchdown reception by JJ Evans from Malik Inabinette. Deon Gilliland added a touchdown run to close the quarter with Montevallo in front, 20-7.

“I think our kids believe they’re going to win, and that was evident tonight being down at halftime and them coming back out in the second half and playing with confidence,” Wilcox said. “Once we got it rolling, we were able to get back in the right mindset and take over the game.”

Eight more points followed early in the fourth quarter to give Montevallo a 28-7 lead before Sipsey Valley mounted a late rally, pulling within a touchdown in the final minutes.

Gilliland finished the night with 142 total yards (96 rushing, 46 receiving) and a touchdown each on the ground and by air. Evans finished with six catches for 130 yards, a touchdown and a 2-point conversion.

Inabinette completed 13-of-25 passes for 250 yards, including two touchdowns and two 2-point passes. He also rushed for a touchdown. His only interception came late in the fourth quarter.

The Bulldogs forced three turnovers in the game, an interception by Alexander Tyes and fumbles recovered by Hunter Bass and Jamarius Carter.

Montevallo (7-1, 4-1) will close out its region schedule next week at home against Greensboro.

By ALEC ETHEREDGE | Sports Editor  CAMP HILL – Prepping for the ACSC State Championship game and a chance to... read more