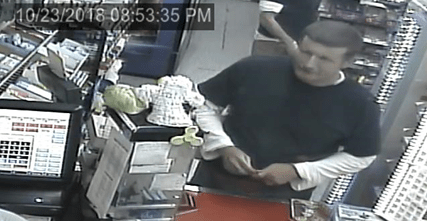 This photo shows Mark Araujo inside a service station in Calera on Oct. 23. (Contributed)

One of two escaped inmates recaptured

MARSHALL COUNTY – One of two inmates who escaped from the Childersburg Work Release Center Tuesday night has been recaptured in Marshall County. 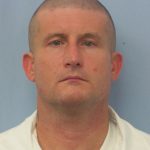 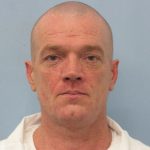 Mark Stephen Araujo Jr., 39, was recaptured at about 2:30 p.m. on Wednesday, Oct. 24, by officers from the Boaz Police Department. A tip led the officers to an apartment complex where they found and arrested Araujo without incident.

A second inmate who escaped with Araujo, 39-year-old Jacob Larry Burnett, is still at large. A surveillance video taken at a service station in Calera shows Burnett standing next to a white utility truck and inside the business at 8:53 p.m. on Tuesday, Oct. 23.

Authorities believe Burnett may be driving the truck and wearing a dark shirt and brown pants. Burnett is 5 feet 9 inches tall with red hair, green eyes and weighs 190 pounds.

Burnett was sentenced to 18 months in July 2018 for third-degree burglary in Shelby County. Araujo is serving a 15-year sentence for a 2016 first-degree theft of property conviction in Walker County.

The public should contact local law enforcement or the Alabama Department of Corrections at 1-800-831-8825 with information that may lead to Burnett’s recapture.

HOOVER – Suicide is the 10th leading cause of death in the United States, yet suicide can be prevented. Volunteers... read more