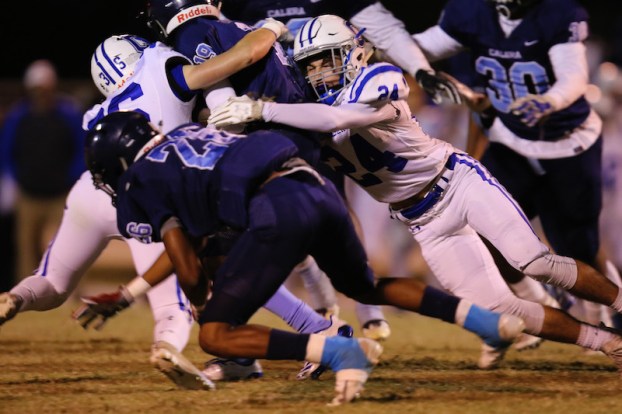 The Chelsea Hornets were able to pick up their second win in a row after taking down Calera in dominant fashion on Friday, Oct. 26. (For the Reporter/Cari Dean)

CALERA – With a combined record of 2-14 coming into the night, Calera and Chelsea had seen their fair share of struggles throughout the 2018 football season, but when the two squared off on Friday, Oct. 26, at Calera High School, it was all about pride.

Coming in off of their first win of the season, however, the Hornets were buzzing and had a regained self-confidence, which led to a dominant. Performance.

In a game that featured very little movement by each offense, the Hornets were able to capitalize on long chunk plays and quick scores both by the offense and special teams, to pull off a 35-3 victory against the Eagles.

Calera actually struck first in the game on a field goal from standout kicker Zach Ford, but from that point forward it was all Chelsea as the Hornets scored 35 unanswered the rest of the way.

The Eagles had a chance to add to their lead in the first quarter due to an interception and Chelsea’s offense struggling to move the ball, but they were never able to tack on any more points.

Something that has plagued Calera so far this season is missed opportunities or mistakes just before the half, and that’s where the game started to turn again this week.

A bad snap on a punt attempt set Chelsea up in great field position with just under two minutes remaining in the first half.

Chelsea went to work, and just before time expired with three seconds left in the half, quarterback Turner Griffin was able to get the ball into the end zone on a 1-yard touchdown run to put the Hornets up 7-3 at the break.

With both offenses struggling to produce any big plays, Ladarius Gary decided to create some excitement on special team to start the second half, as he took the opening kickoff and returned it to the house for a touchdown to put the Hornets on top 14-3.

Having scored two touchdowns in the last 18 seconds of game time, Chelsea had completely shifted the momentum of the game and took advantage.

The defense continued playing lights out, while the offense was able to create the first exciting chunk play of the game when Lando Nichols took a handoff and went 50 yards to the end zone for another touchdown to extend Chelsea’s lead to 21-3 with five minutes left in the third quarter.

It took less than four minutes for that lead to be extended again as the Hornets got a 38-yard pass from Griffin for another chunk play before Collier Blair punched in a 1-yard touchdown to put Chelsea ahead 28-3 at the end of three quarters.

Less than four minutes after that, an all of a sudden hot Chelsea offense added another score, this time on a 38-yard touchdown pass from Griffin to Blair for the final score of the night, as the Hornets pulled off the 35-3 win.

Turner Griffin finished the game 5-of-17 for 160 yards and one touchdown passing.

His favorite target was Blair, who hauled in two catches for 75 yards, while Gabe Ruffin added one catch for 41 yards.

Chelsea will now play host to Pell City on Friday, Nov. 2, while the Eagles will travel to take on another county opponent in the Helena Huskies.

Montevallo airs it out in win over Greensboro

By CHRIS MEGGINSON | For the Reporter MONTEVALLO – It was another pitch-and-catch night for Montevallo’s Malik Inabinette and J.J.... read more