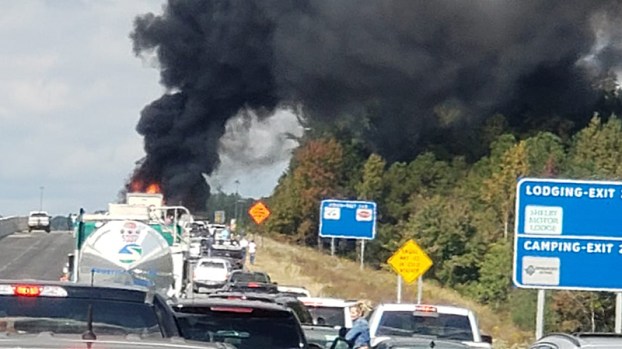 Three people died and another person was transported to Shelby Baptist Medical Center after a four-vehicle crash on Interstate 65 in Pelham on Oct. 27. (Contributed/Leticia Bynum)

Three die in fiery 4-vehicle crash on I-65

PELHAM – Three people died and another two people were transported to area hospitals following a fiery four-vehicle crash on Interstate 65 between Pelham and Alabaster.

Alabama state troopers responded to the crash in the northbound lanes near the 241 mile marker at about 1:40 p.m. on Oct. 27.

Troopers confirmed there were two fatalities on the scene, and one person who was airlifted to UAB Hospital died of her injuries shortly after 7 p.m. Another person was transported to Shelby Baptist Medical Center.

The crash forced troopers to close I-65 northbound, causing traffic to be diverted onto U.S. 31 between exits 238 and 242 for more than two hours. The interstate had reopened to traffic by 4 p.m.

“Police officers are working traffic control in other parts of the city to try to alleviate congestion. Please be patient if you are traveling anywhere in the Pelham City Limits,” read a Pelham Fire Department Facebook post.

Pelham locks up playoff spot with win over rival Helena

By JEREMY RAINES | For the Reporter Pelham – On a 56 degree chilly, windy, and misty night in Shelby... read more