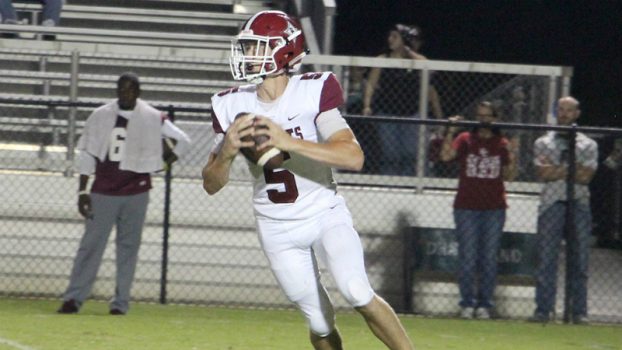 The Shelby County Wildcats were able to close the 2018 football season out with a win thanks to an incredible second-half comeback against St. Clair County on Thursday, Nov. 1. (Contributed)

SPRINGVILLE – While many may look at Shelby County’s 2018 football season as a disappoint and similar to last year’s struggles, the Wildcats proved they were a different team in a big way on the night of Thursday, Nov. 1, in their final football game of the season.

In 2017, Shelby County closed the season out with five consecutive losses, including losses in five of its last six games. This season, the Wildcats were trying to avoid losing four straight to end the season when they traveled to take on the St. Clair County Saints.

While they could have easily folded and not shown up for the game, the Wildcats showed a different attitude than we have seen in a while and came out with a purpose to win the football game, which led to one of their best efforts of the season in a 48-33 victory.

With the win, Shelby County finished the season 3-7 overall, but more importantly showed there was no quit in the players this year.

An offense that scored 12 combined points through its first three games, ended the last three games with 44-plus points in each and came close to ending the year on a three-game win streak with losses to Central Tuscaloosa, by six, and Jemison, by 11, the last two weeks.

Like the season, Shelby County faced adversity in this game and was forced to not give up after finding themselves in a first-half deficit.

The Wildcats were a little slow out of the gates, which led to the Saints jumping in front by 10 points at the half, 26-16.

Out of the locker room came a different Shelby County team, however.

Almost like a flip switched and all of the Wildcats’ hard work was meant to be rewarded.

They chipped away at the lead quickly in the third quarter with a touchdown and a 2-point conversion that brought them within two points of the lead at 26-24.

While the defense had given up 129 points in the last 10 quarters of play, something seemed to click in the second half.

In what became a stagnant rest of the third quarter, the defense became key in keeping the Wildcats down by just two points until the go-ahead score came with a minute left in the quarter. Following another 2-point conversion, Shelby County held a 32-26 lead heading to the fourth quarter.

The defense continued to play stout to start the third quarter, and with 5:45 left in the game, the Wildcats added another touchdown and 2-point conversion to take a 40-26 lead, giving them 24 unanswered points in the second half.

St. Clair County, however, ended its scoreless drought just a few minutes later with a touchdown to get within seven points at 40-33 to make things interesting again.

That score came with 2:17 left in the game, but less than 10 seconds later, Shelby County put the final nail in the coffin with an explosive play that went for a touchdown and allowed the Wildcats to take a 48-33 lead with just two minutes left in the game.

St. Clair County was unable to answer, as Shelby County had outscored the Saints 32-7 in the second half alone to pull off the incredible comeback win thanks to the never-give-up attitude.

The Wildcats will miss out on the postseason, but improved throughout the season as a culture change has helped this team build for the future, and this senior class helped instill that change.