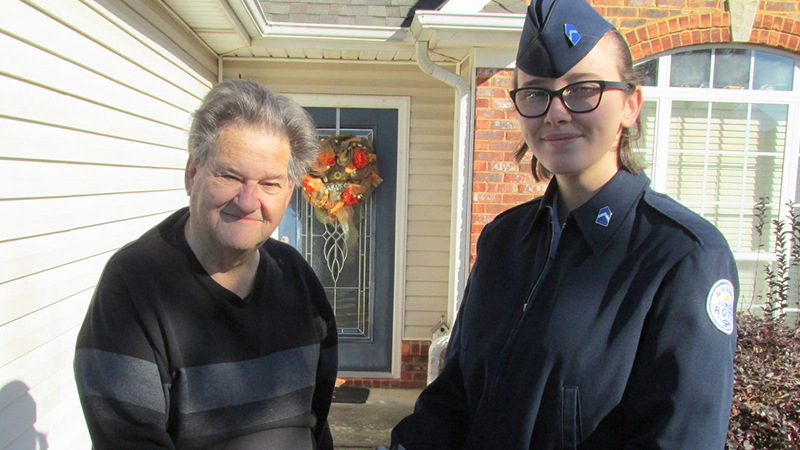 By Michael Brooks / Special to the Reporter

ALABASTER – The homeowners association of Silver Creek subdivision in Alabaster decided to honor veterans in a unique way on Saturday. With the assistance of Lt. Col. Doug Crabb and the Thompson High School Air Force Junior ROTC, every veteran received a personal greeting, a salute and a festive red, white and blue ribbon affixed to their mailboxes for Veterans Day.

“We had a cook out one year, and then one year we had terrible weather when we tried it again!” she said with a laugh. “And the city does an event at Veterans Park, and of course there’s a nice parade in downtown Birmingham, so we tried to think of something unique and special we could do in our neighborhood.”

Morris said the homeowners board is composed of four members and six at-large members, and everyone was busy beforehand making ribbons for the cadets to deliver.

On Saturday the cadets split into three groups and were assigned to a board member as their guide.

Morris said she’s proud of the cadets and of her long association with area students. She retired as a counselor at Shelby County High School and Columbiana Middle School, and now works part-time at the Alabaster City School Central Office.

Lt. Col. Doug Crabb, in his sixth year as director of the program at Thompson, said cadets logged more than 2000 hours of community service last year, including work at the American Cemetery, the Alabaster Senior Center and a local animal shelter. Cadets also helped raise $1500 for the Fallen Warrior Project.

“Our color guard stays active, too,” he said. “They present colors at many local events.”

Crabb said the program at Thompson is in its 25th year, and this year’s roster includes nearly 100 cadets.

“We have our annual veterans program and breakfast on Nov. 9,” Crabb said. “We invite all veterans to join us at 8:30 at the Thompson Arena for an inspiring program and a complimentary breakfast.”