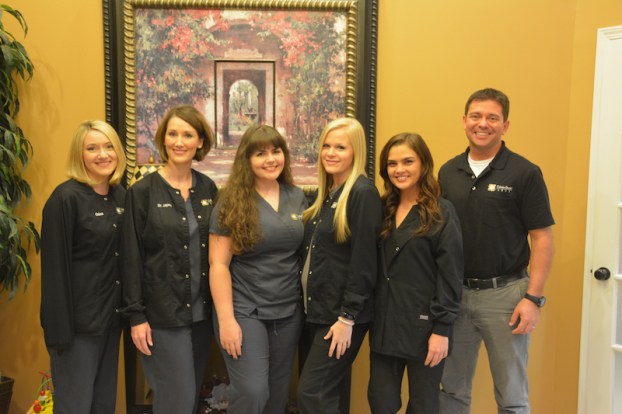 Cahaba Dental Arts and its staff celebrated its 10 year anniversary after opening in Helena in November 2008. (Reporter Photo/Graham Brooks)

HELENA – A local Helena dentistry focused on quality comprehensive dental care is celebrating its tenth anniversary in the community.

Cahaba Dental Arts, led by Dr. Jayme Mashayekh and her staff, celebrated 10 years as a dentistry in Helena this November after opening at 100 Brook Drive Suite A in November 2008.

“It’s always been a bunch of young families so it’s kind of been neat over the years seeing a lot of little one’s graduate and go off to college,” Jayme said. “Even some are done with college and coming back so having been here for 10 years I’ve seen quite a few people.”

Before opening the practice in Helena, Jayme was in dental school at The University of Alabama and worked four days a week in Tuscaloosa with hopes of one day opening her own practice.

Jayme and her husband Hamid Mashayekh were living in Helena at the time and they both knew the city would be the right place to open a dentistry when the timing was right.

“I started out knowing I wanted to open an office so I actually worked in Tuscaloosa four days a week and then I cut back there to start this,” Jayme said. “We lived here in Helena when I was going through dental school and we knew we wanted to set up here.”

After initially opening Cahaba Dental Arts, the staff consisted of Jayme and one other staff member.

Other changes that have happened since 2008 include the opening of Helena High School in 2014 and an upgrade in technology.

“One of the big things that has changed since we opened was two years ago we got a Cerec machine so I’m able to do crowns all in the office in one day,” Jayme said. “That’s been one of the biggest changes actually in the office. We were one of the first in Alabama to get it.”

Cahaba Dental Arts prides itself on being involved in the Helena community which includes volunteering for First Friday’s, Buck Creek Festival, sponsorships at the schools and more.

“I think the best thing about being here is the tight community feel,” Jayme said. “I feel like people in Helena support each other and they want to help each other out as much as possible.”

Cahaba Dental Arts is open Mondays, Wednesdays and Thursdays from 7 a.m. to 4 p.m.

For more information on the dentistry including a full list of services, visit Cahabadentalarts.com.