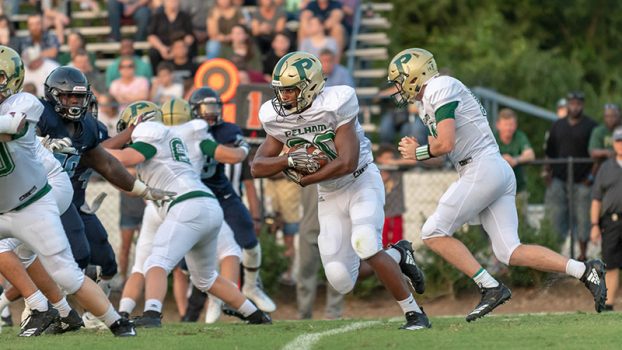 By SAM ROBERTS | For the Reporter

HARTSELLE – The unbeaten Tigers entered Friday night’s matchup in the 6A state playoffs versus the visiting Pelham Panthers (7-3) looking to grab their first postseason victory since the 2016 season when Hartselle took down Albertville.

The night started off as a defensive showdown, as Pelham forced two turnovers on downs while Gunner Wiggins of the Tiger defense recovered a fumble through only two quarters until the Panthers marched down the field and found the end-zone for the first time of the night behind a 3-yard rushing touchdown.

Hartselle regained possession after Pelham secured the PAT, and answered the momentum with a scoring drive of its own behind a 61-yard carry into the end zone by Luke Godsey. The fierce Hartselle defense then forced the Panthers to punt once more and Jack Smith returned the kick for a 70-yard score to give the Tigers a 21-7 advantage heading into the half.

Hartselle didn’t soon slow down, as the Tigers carried their momentum into the third quarter with a forced turnover inside the Pelham 10-yard line, which was followed by Godsey connecting with Keondre Swoopes for a 5-yard touchdown pass.

The Tigers only strengthened their lead through the remainder of the night behind another touchdown carry from Swoopes and Barclay, as the Panthers failed to add any more points to the board against a stout Hartselle defense.

Which school districts have best teachers?

By NEAL WAGNER / Managing Editor Multiple local school districts have some of the best teachers in the state, according... read more