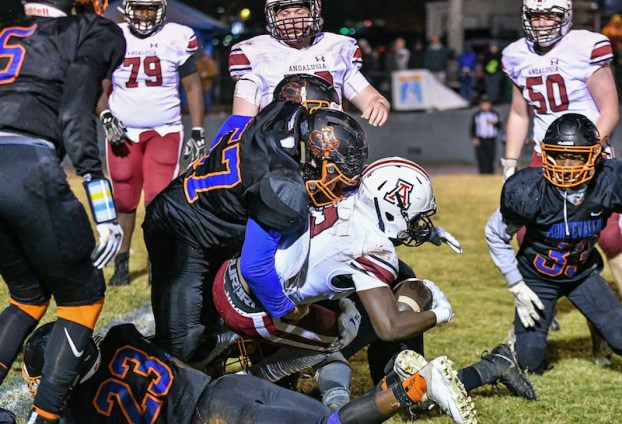 Montevallo's 2018 football season came to an end in the first round of the playoffs with a difficult 28-8 loss to Andalusia. (For the Reporter/Jeremy Raines)

Special season ends for Montevallo in first round

By JEREMY RAINES | For the Reporter

MONTEVALLO – The Montevallo Bulldogs came into the first round of the playoffs looking to extend a special 9-1 season against Class 4A Region 1 third-place Andalusia, but instead, it became a tough night in the cold for an offense that had set records throughout the season.

The Bulldogs ended up posting one of their lowest yardage totals in a game this season against an Andalusia defense that was giving up just 16 points per game coming into the season, which led to a 28-8 home loss in the first round for Montevallo.

From the start of the game, it was clear a defensive game might ensue as both teams started sloppy on offense combining for 3 turnovers halfway through the first quarter.

After giving up a big pass shortly after, Montevallo’s defense had a costly offsides penalty that gave Andalusia first-and-goal. Immediately following the penalty, confusion for Montevallo caused yet another flag for an illegal substitution.

In the blink of an eye, the Andalusia Bulldogs went from facing a critical fourth-and-1 to having a first-and-goal from the 4-yard line. This allowed Andalusia to run up the middle to take a 7-0 lead at the end of the first quarter.

Montevallo responded with a great possession of its own getting deep into Andalusia’s territory, but more costly penalties and great defense from Andalusia forced Montevallo to a fourth down from the Andalusia 13-yard line.

Unable to find a receiver, Andalusia forced Montevallo quarterback Malik Inabinette to scramble out of the pocket before taking a big sack. The missed opportunity was the story of the night, as the Bulldogs scored just one time in five redzone trips.

Andalusia capitalized on the Montevallo misfortune with a huge pass across the middle to set themselves up for a touchdown scamper by the quarterback shortly after to extend its lead to 14-0 with 6:15 left in the first half, which eventually became the halftime score.

On the first play of the second half, Montevallo mishandled the ball taking a 17-yard loss on a fumble but recovering to retain possession.

Montevallo, however, elected to go with a fake punt pass play from its own 15-yard line on fourth and long, and the play was unsuccessful almost getting picked off.

This gave Andalusia excellent field position, which it capitalized on shortly after with a nice touchdown pass to increase the lead to 21-0.

Finally, at the at the 1:15 mark of the third quarter, running back Deon Gilliland picked up the first and only touchdown for Montevallo with an 8-yard run. A successful 2-point conversion pass to Jamarius Carter made the score 21-8

With 9:37 left in the game, Andalusia didn’t let off the brakes as a pass ended up being tipped by the intended receiver before being bobbled around and finally secured before he took it to the endzone to bring the game to its final score of 28-8.

Overall, Malik Inabinette finished the game 21-of-38 with 174 yards passing. JJ Evans finished as the top target with eight receptions for 73 yards.

Deon Gilliland rushed for 72 yards on 12 carries with one rushing touchdown and added six receptions for 54 yards.

Defensive leaders included Tavicia Tutt who had 10 tackles and two fumble recoveries, as well as Orlandis Weeks who had eight tackles. Isaiah Chapple and Evans each had a fumble recovery.

Montevallo finished the year 9-2, while the Andalusia Bulldogs improve to 7-4 and move into the second round of the AHSAA playoffs where they will play host to the 10-1 Headland Rams.

By ERIC STARLING | For the Reporter ALABASTER – The Thompson Warriors started a new football season on Friday, Nov.... read more