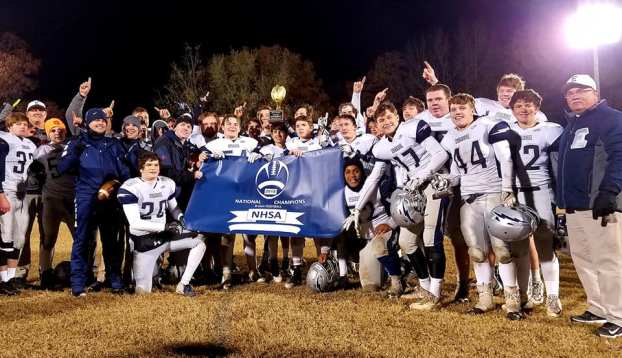 The Evangel Lightning were able to pull off an impressive comeback to win the 2018 NHSA National Championship against previously unbeaten Christian Community (Tenn.). (Contributed)

PANAMA CITY, Fla. – Two weeks after a thrilling comeback win against Ezekiel Academy to win yet another ACSC State Championship by a final score of 58-34, the Evangel Lightning were back on the comeback trail, but this time on a much bigger stage competing in the NHSA National Championship game against No. 1 ranked and unbeaten Christian Community (Tenn.) in Panama City, Florida.

The Lightning found themselves trailing 12-0 at the halftime break, but quickly turned the momentum around on the first play of the second half when Dawson Humphries took the opening kick of the half to the house for a touchdown.

Following a successful 2-point attempt by Tyler Henderson, Evangel was within four points at 12-8.

Christian Community answered once more with a touchdown and a successful 2-point conversion to extend its lead to 20-8, but the Lightning had been in this situation before and knew exactly how to react.

From the 7:08 mark through the rest of the game, Evangel flipped a switch and turned dominant. The Lightning went on to score 28 unanswered points the rest of the game to claim the 2018 National Championship game by a final score of 36-20 and hand Christian Community its first loss of the season.

“I am so proud of this team,” head coach Tim Smith said. “To battle through all of the adversity this season with several key players being injured along the way and to still finish the way they did as state champs and national champs. I couldn’t be more excited for them.”

Early in the game, Christian Community was able to get the game’s first score from quarterback Nathan Rowley’s legs as he picked up a short touchdown run to put his team on top 6-0 with 3:08 left in the opening quarter.

It didn’t take long for them to add to that lead as Rowley hit receiver Mark Pugh for the game’s second touchdown pass that put Christian Community on top 12-0 with 7:38 left until halftime.

It looked like the Lightning were going to strike just before the half after driving to the opponent’s 4-yard line, but instead they fumbled the ball trying to get into the end zone and ended the half down 12-0.

That’s when Evangel was able to find a halftime spark, however, as the Lightning came out of the locker room with a different energy.

It started with the kickoff return by Humphries to bring Evangel within four.

And although Christian Community answered with a score on another touchdown pass from Rowley to Pugh, Evangel still seemed comfortable with the situation it was in after being down to Ezekiel late in the game just two weeks prior for a state title.

Trailing 20-8 with 7:08 remaining in the third quarter, the Lightning didn’t panic and had a huge answer on the ensuing drive marching down the field in just two minutes of game time before Noah Shears pounded in a touchdown with five minutes remaining.

While both offenses were moving the ball with ease now, Humphries decided to make another game-changing play on Christian Community’s next drive.

On an option play, Humphries was able to step in front of a pitch from Rowley to Pugh to grab the ball before using his wheels to go to the house yet again for a touchdown. This time, he put Evangel in front with its first lead of the game at 22-20.

The defense continued to play strong and now having the lead, the offense was able to rely heavily on the ground game again. Behind some big runs from Shears, the Lightning were able to drive down the field again before Daniel Viles scored on a short touchdown run and Shears added the 2-point conversion to give them a 30-22 lead with 8:32 remaining.

Christian Community had chances to score over the next few minutes with several passes into the end zone, but drops ended up costing them and leading to a turnover on downs.

From that point, Evangel got back to its ground-and-pound attack to wear down Christian Community. The Lightning went on another long drive behind more strong running from Shears, as he eventually broke off another touchdown run to close out the game’s scoring at 36-20, which sealed the national title.

Shears’ workhorse game earned him the MVP award after totaling 225 rushing yards in the win, no small feat for the running back who broke his ankle in the first game of the season.

The Lightning ended the game with a total of 301 rushing yards.

Smith was proud of his performance, but also noted the defense played an important part in the second-half comeback with Hunter Green, Samuel Graham and several others keeping Christian Community from scoring more than eight points in the second half.

Evangel finished the season 9-3 overall after winning the ACSC State Championship and NHSA National Championship in Smith’s second year at the helm.

By SAM ROBERTS | For the Reporter HARTSELLE – The unbeaten Tigers entered Friday night’s matchup in the 6A state... read more