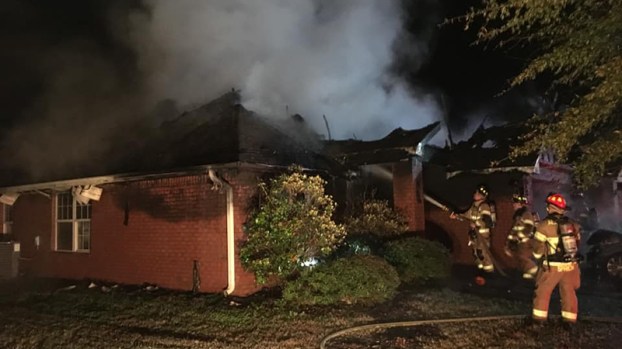 Alabaster firefighters work to extinguish a fire on Hidden Brook Trail on the night of Nov. 10. The fire heavily damaged the house and vehicles in the driveway, and a fundraiser has been established for the family. (Contributed/Alabaster Fire Department)

ALABASTER – No injuries resulted in a weekend fire in Alabaster’s Stoney Meadows subdivision, but the home suffered heavy damage and an online fundraiser has been established to help the victims of the incident.

The Alabaster Fire Department responded to the fire on Hidden Brook Trail on the night of Nov. 10, and arrived to find the fire heavily involved with flames visible from outside the residence, said Alabaster Fire Chief Tim Love. Firefighters were able to control the blaze soon after arriving.

Love said the homeowner and her children were in the residence when the fire started, and were able to escape without injury. The fire started as the result of a heater, which is a trend the department sees frequently during the winter months.

“We see a lot of fires starting that way this time of year,” Love said, noting items such as space heaters or heated blankets for pets should be carefully monitored while in use. “We want people to keep their pets warm, but be safe while they’re doing it.”

AFD and the Red Cross worked to find the residents a place to stay the night of the blaze, and helped to provide them with immediate necessities. The family currently is staying at a local hotel until temporary housing is available.

A Gofundme.com fundraiser is seeking to help the homeowner replace some of what was lost in the fire.

“(The homeowner) needs clothing and shoes. The kids lost all of their Christmas presents that (their mother) had spent money on,” read the fundraiser page, noting the homeowner’s new vehicle was also heavily damaged in the fire. “As they transition into another home from the hotel where they’re now staying, housewares will be needed too. This GoFundMe account will help offset some financial burden in their time of need and allow them to purchase clothing and other needed items.”

As of the morning of Nov. 13, the fundraiser had generated a little more than $1,500 toward its $2,500 goal. To donate to the family, visit Gofundme.com/veitch-house-fire-help.