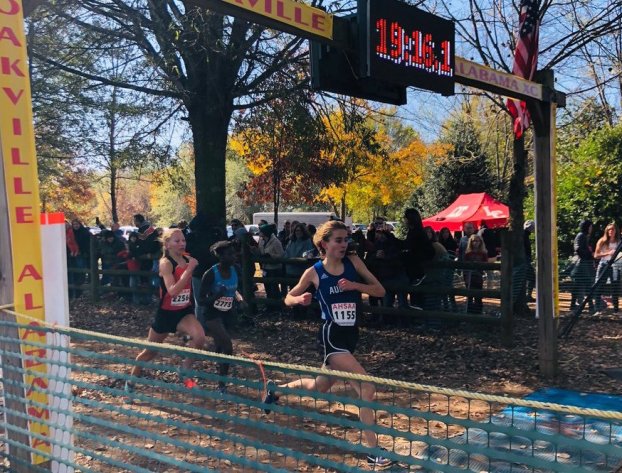 Spain Park's Mackenzie Culpepper finishes her race as the highest 7A finisher at the state championship meet from Shelby County. (Contributed)

The Oak Mountain Eagles boys team was the only one to make the trip with their full roster thanks to qualifying in the sectional race out of one of the most difficult sections in the state and had several strong performances at the state meet.

Aside from just the boys, however, Oak Mountain’s girls had a few runners in attendance as did Spain Park’s and Thompson’s boys and girls.

While many runners had stronger performances throughout the season leading to no local runners finishing inside the top 10 of either the boys or girls race, a familiar face did end up being the county’s highest finisher.

With a finish of 14th in the girls race, Spain Park freshman Mackenzie Culpepper culminated a long season of hard work with a top-15 finish thanks to her time of 19:16.69.

It marked her sixth race out of nine this year that she finished in less than 20 minutes.

Spain Park’s other two runners in the race were junior Holland Lidikay and freshman Lyric Bryant, who finished in 45th and 68th, respectively.

The next highest girls finisher outside of Culpepper was Oak Mountain’s Evie Bell, who finished 21st with a time of 19:35.33. Teammate Emma Grace Phillips was 19 spots lower in 40th with a time of 20:21.42 to end her sophomore season.

Emily Allen, a sophomore, was Thompson’s only runner to represent at the state meet and she finished the race in 20:06.47.

In the boys race, Oak Mountain was able to finish eighth as a team in the overall standings thanks to the county’s highest boys finisher in Walker Cole, who grabbed 21st with a time of 16:23.24.

It marked the fifth consecutive race he had run in less than 17 minutes, but was also his lowest finish in that span thanks to the fast pace of the race.

Consistency helped the Eagles out after that thanks to Bryce Keefover (35th), Jonah Barrett (37th) and Hansen McCown (38th) all finishing close to each other to help the team finish inside the top 10 of the standings.

The county’s second highest finisher in the race was none other than Spain Park’s Jacob Warner, who closed out his career with a finish of 23rd after running the race in 16:24.63.

Thompson also had two of its better runners advance to the race in Brandon DeMarcus Lee and Jace Jones, who have both been mainstays in the top 10 the last two years. Lee ended his stellar career with a finish of 40th, while Jones concluded his junior season with a finish of 78th.

By ERIC STARLING | For the Reporter ALABASTER – The Thompson Warriors started a new football season on Friday, Nov.... read more