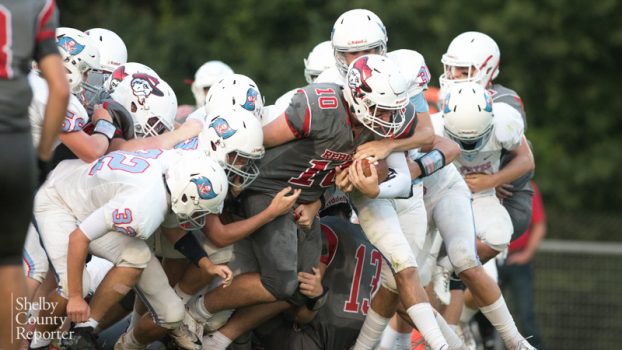 Coosa Valley's Kaleb Allen and Kingwood's Jayton Denard will both be playing in the AISA All-Star game this Friday night in Montgomery at the Crampton Bowl. (File)

MONTGOMERY – This Friday night, Nov. 29, two local players will travel to the Crampton Bowl in Montgomery as they take part in the 2018 AISA All-Star football game scheduled to kick off at 6:30 p.m.

Coosa Valley Academy’s Kaleb Allen and Kingwood Christian School’s Jayton Denard, will be two of the top players from the state in the AISA football division that are taking part in the prestigious All-Star game.

Allen finished his senior seasons as one of the best running backs in the AISA totaling 1,089 yards and 11 touchdowns on offense, while also seeing success on the defensive side of the ball adding 63 total tackles and two sacks.

His career has been special, but Allen’s season became outstanding on Friday, Oct. 12, when the running back had 303 yards rushing and four touchdowns to lead his team to a 32-19 victory against Springwood Academy to pull within a win of a playoff spot.

A week later, he pulled off a 233-yard performance on the ground while adding four more touchdowns, which really cemented him as one of the best backs in the state.

He was a big reason the Rebels were able to make the playoffs and finish 4-8 overall this season with a first-year head coach in Jamie Scruggs and freshman quarterback in Brayson Edwards. His leadership was key to helping the team take the strides it did in 2018.

Denard spent time both on offense and defense for Kingwood this season and had an impact on both sides of the ball for the Lions.

He wasn’t just one of the team’s leaders, but the captain of the team thanks to the way his players always trusted him and the work ethic he put in each day of the season.

In seemingly every game he played in this season, Denard totaled at least five tackles, but was often closer to 10 tackles and posted 14 at one point during the year.

Both athletes will get the opportunity to represent their schools and play alongside some of the best.