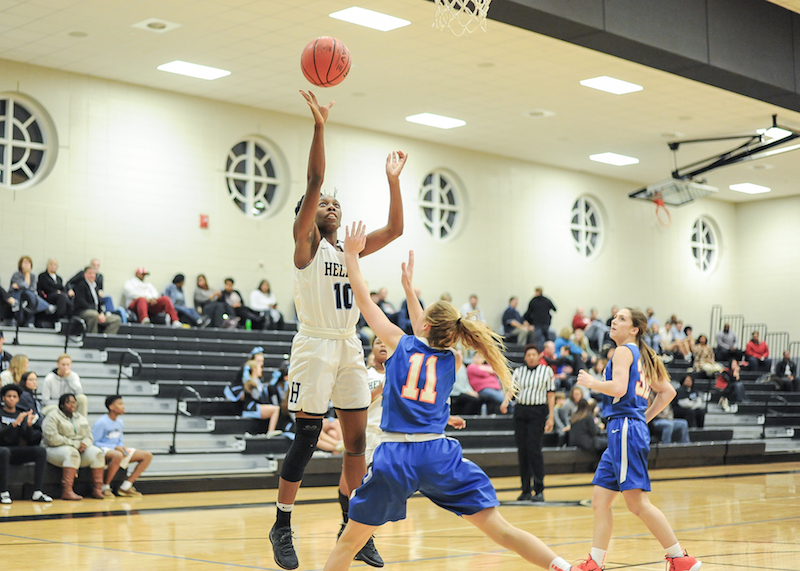 Helena jumped out to an 18-3 lead and never looked back in a 54-13 win over Chilton County on Tuesday, Nov. 27. (For the Reporter/Jeremy Raines)

HELENA – After dropping their first game of the season, the Helena Huskies girls basketball team has bounced back and reeled off three straight wins including an impressive 54-13 win over Chilton County on Tuesday, Nov. 27.

In the first game back since Thanksgiving break, the Huskies showed no signs of rust finishing with seven 3-pointers, plenty of points in transition and points off turnovers.

Helena came out of the gate fast knocking down four 3-pointers in the first quarter with two of those coming from Julia Hensley. Autumn Edmonds and KK Busby also had a 3-pointer as the Huskies jumped out to an 18-3 lead.

It was more of the same the remainder of the first half as Helena outscored the Tigers 18-4 in the second quarter while forcing several Chilton County turnovers to take a 36-7 lead.

In the second half, Helena extended its lead to more than 30 points which resulted in a running clock for the fourth quarter where the Huskies pulled away for the 41-point win.

Helena had two scorers finish in double figures as Hensley led all scorers with 14 points while Edmonds finished with 10 points. Eight Helena players recorded at least three points in the game.

After the game, Helena head coach Alan Skinner was happy with the way his team started the game.

“I think anytime you play a game and you can get out to a fast start offensively that’s a quick way to calm any nerves,” Skinner said. “You come out and start a game and you can’t throw it in the ocean from a boat or turn the ball over then it’s going to be a hard time. But if you come out and go on a little run that helps you settle into the game and get the pregame jitters shutdown.”

With the win, Helena improved to 3-1 on the season. Next up, the Huskies will travel to McAdory to take on the Yellow Jackets on Thursday, Nov. 29.