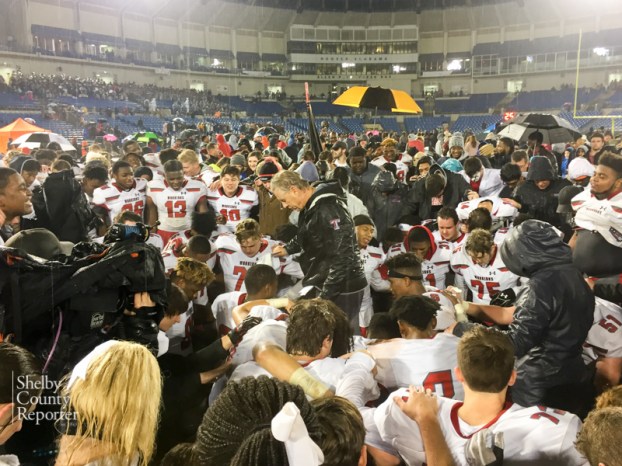 It’s been 36 years in the making, but now, this Wednesday, Dec. 5, the Thompson Warriors are back in the state championship game at Jordan-Hare Stadium in Auburn.

Just four years removed from an 0-10 season, the Warriors have done the remarkable and completely turned their program around under head coach Mark Freeman, a strong core of coaches and some of the best players in the state.

Now, there’s just one more test, and a big test it is, as Thompson tries to handle the big stage to bring home the school’s second state championship in as many appearances.

If the Warriors are going to accomplish that feat and make history, it’s going to come against a 13-0 team averaging 40.5 points per game offensively and giving up just 7.8 points per game defensively.

Those are the kind of numbers Central-Phenix City has put up this year on its way to its second state championship appearance in school history as well.

Thompson is also playing well on both sides of the ball scoring 37 points per game and giving up 17.6 points per game, but the Warriors fall short of the Red Devils in both categories.

Both teams are coming off of thrilling semifinal wins with Thompson having come from two scores down in the final six minutes to scoring a game-winning touchdown with 21 seconds left against Hoover, and Central connecting on a 49-yard touchdown pass from LSU commit Peter Parrish to tight end Kameron Mason with eight seconds left to lead the Red Devils to a victory against Lee Montgomery.

It was really Central’s first time facing adversity this season down two scores in the fourth quarter after starting the season by scoring 40-plus points in eight of its first nine games, winning by an average margin of victory of 33 points in those eight games.

While the Red Devils haven’t faced quite the opponents Thompson has this season, specifically playing Hewitt-Trussville and Hoover twice, their schedule hasn’t been much easier than the Warriors, as they have been on the dominant ends of victories for the majority of their 13-0 record.

The reason for that has in large part been their defense. Central’s defense has giving up more than 10 points in just four games this season, and has given up more than 18 in just one game—last week to Lee. The Red Devils have also pitched six shutouts this season, including the first two rounds of the playoffs.

That’s a challenge that will face Taulia Tagovailoa, Shadrick Byrd and this talented Thompson offense, but it’s an offense that has been battle tested against top notch teams this season with several highly recruited players.

It’s also a team that has faced difficult situations throughout the season against top-5 teams and never once faltered or given up.

Early in the season during the Warriors’ first matchup with Hoover, they found themselves down 21-0 against the defending 7A state champion, but never wavered and came back to make that a one-score game in the fourth quarter, and despite the loss, that game set the tone for this year’s team.

The defense struggled mightily throughout, the receivers dropped balls and yet Thompson still almost pulled off an improbable comeback.

Moving forward, when the Warriors faced a deficit in the fourth quarter against Vestavia Hills, they never panicked and battled back for a slim 21-20 victory, and then came the real turning point two weeks later.

Through the first eight-and-a-half games, Thompson was easily a top-five team but was still missing something that made them feel like a state championship caliber team.

Then came Hewitt-Trussville on Friday, Nov. 16. The first half of that game was not anything the Warriors wanted to remember.

Similar to the Hoover game earlier in the season, they fell behind 21-0 at the end of the first quarter, and quickly 28-0 early in the second quarter, but then a change came over this team, almost as if they knew they were the much better team.

Thompson went on to erase that deficit and outscored Hewitt 63-21 over the next two-and-a-half quarters to pull off a 63-49 victory.

As soon as that final second ticked off the clock, the Warriors had proven themselves as a team that could win a state championship in 2018.

You could see the team’s confidence rise and it hasn’t left yet as they picked up a 37-13 victory against the Huskies in the second round of the playoffs before following that up with the thrilling win against Hoover.

Now that Thompson has taken on two of the top four teams in the state in the last two weeks and beaten them and has an overall record of 3-1 against them this season, it’s hard to see them losing this championship with that track record.

It’s not going to be easy against the state’s No. 1 team, but at this point, with it down to two last teams, neither truly has an advantage over the other.

Central wins on paper with their offense and defense, while Thompson wins with their track record of beating two teams that could have easily won the title this year in the last two weeks.

It simply comes down to which team will play fundamentally sound and execute properly against a great football team.

I honestly wouldn’t be surprised if either team wins, but my pick comes down to the simplicity of what each did in the semifinals.

Thompson’s biggest key in this game will be to get off to a fast start. A team that has been known for slow starts and as being a second half team, will benefit tremendously by doing so.

The Warriors will be taking on one of their toughest defensive tests of the season, so playing from behind isn’t a recipe for success. If they can come out and go up 7-0, get a defensive stop, and then take a 14-0 lead early on, that would be everything and more that they could ask for.

Obviously the defense’s success and improvement throughout the season has been what turned the Warriors into a state championship team, and it’s also something that will have to show up in this game against a team full of weapons offensively.

The aggressive and physical nature they showed against Hoover last week was a drastic change from what we saw in Week 3 of the season, and it’s something they need to use for confidence heading into Wednesday’s matchup.

Offensively, the run game has been unreal the last five games of the season with both Byrd and Tagovailoa running wild, but this game will be won with the receivers.

I truly do see Tagovailoa going out with a bang at Thompson. The Warriors will try to set up the run early on to open up the passing game, but if Michael Pettway, A.J. Bonham, J.B. Mitchell and others are catching the ball, look out for the numbers that will be put up by Thompson’s offense.

It’s going to be a lot of fun, and a historic moment for the Warriors regardless, but I have full faith in the improvement of this year’s team and the tests they have faced, that this is a state championship team at the end of Wednesday night.

By ALEC ETHEREDGE | Sports Editor HOMEWOOD – Down 53-52 with 1.6 seconds left and relying on fumes in double... read more