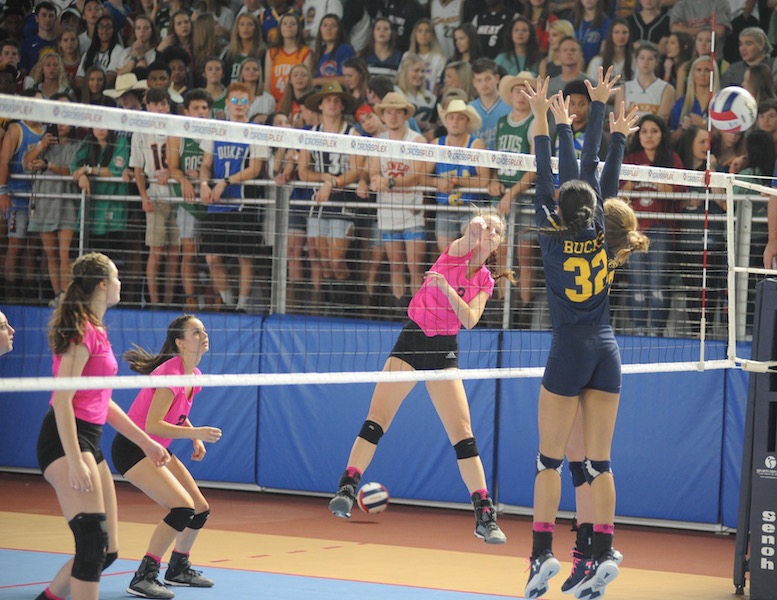 Several of the best players from across Shelby County were named to the 2018 All-County volleyball team. (File)

It was another fantastic volleyball season across Shelby County with multiple teams making a run to the super regionals including Spain Park, Thompson, Chelsea, Pelham, Briarwood, Shelby County, Montevallo and Westminster at Oak Mountain with the Panthers and Knights making the state tournament.

A part of those special runs was all of the players on those teams, and below we have gathered some of the best from across the county to represent our 2018 All-County Volleyball team.

Outside Hitter: Sarah Guthrie, senior, Pelham. One of the many stars on this year’s Pelham squad that made a run to the Elite 8, she ended her final year with 425 kills to lead the county while adding 388 digs and 106 aces.

Outside Hitter: Erin Long, junior, Pelham. Still just a junior, Long posted 381 kills, 316 digs, 38 blocks and 34 aces as a multifaceted player that did it all.

Outside Hitter: Shakevia Hogan, senior, Spain Park. Hogan had a standout senior season with 371 digs, 366 kills, 48 blocks and 37 aces to lead the Jags.

Middle Hitter: Kayleon Lamar, junior, Montevallo. The Bulldogs had a special year that ended in the super regionals with Lamar playing a big role. She had 372 kills, 104 digs and 58 aces.

Middle Hitter: Emma Johnson, senior, Helena. Johnson was one of the many seniors on this year’s Helena team, and helped play a part in another remarkable season for the Huskies.

Middle Blocker: Jules Hamer, senior, Chelsea. Hamer was one of the most dynamic players in the county this year and totaled 392 digs, 373 kills and 61 blocks for the Hornets.

Setter: Georgia Stonicher, senior, Pelham. Stonicher stuck out every game the last couple of years because of her crazy assist total, and in 2018, she finished her senior year with a county-high 1,203 assists, while adding 332 digs and 78 aces.

Setter: Jessica Veal, junior, Spain Park. The next highest assist total was almost 500 lower, but still a crazy number, and that was set by Veal with 725 assist. She also added 175 digs and 31 aces for the Jaguars.

Setter: Bailey Drew McIntyre, junior, Chelsea. Another crazy assist total was set by McIntyre who posted 530 assist with an impressive 93 aces and 281 digs as well.

Libero: Victoria Schmer, junior, Chelsea. Schmer was one of the best Libero’s in the state this season and totaled 792 digs and 132 aces as a junior.

Outside Hitter: Takila Hill, senior, Montevallo. Hill posted 302 kills, 179 digs and 97 aces for the Bulldogs as a senior that will be sorely missed next year.

Outside Hitter: Audrey Rothman, freshman, Spain Park. One of the youngest players on the team, Rothman earned a spot because of her versatility. She posted 355 digs, 267 kills, 64 aces, 56 blocks and 18 assists this year.

Outside Hitter: Zoe LaBreche, junior, Chelsea. With 355 digs, 298 kills and 77 aces this season, LaBreche was an integral part of Chelsea’s team and will return next year.

Middle Hitter: Kolbi Reed, junior, Thompson. Led a strong net attack for the Warriors with 281 kills while also adding 194 digs as a junior this year.

Middle Blocker: Diamond Gilliland, senior, Thompson. Gilliland passes the eye test and was scary anytime she got a clean set. The senior ended her final season with 223 kills and 77 blocks.

Setter: Briana Wilson, freshman, Thompson. Another youngster worthy of recognition was Wilson, who led the Warriors with 41 aces, while posting 515 assists, 227 digs and 46 kills as well.

Setter: Sara Swee, senior, Chelsea. With 512 assists and 127 digs, Swee did more than enough to earn a spot on the All-County team this season.

Libero: Josie Hester, senior, Pelham. Hester finished second in the county in digs with 540, while also adding 34 aces throughout the year to make her mark on a special Pelham team.