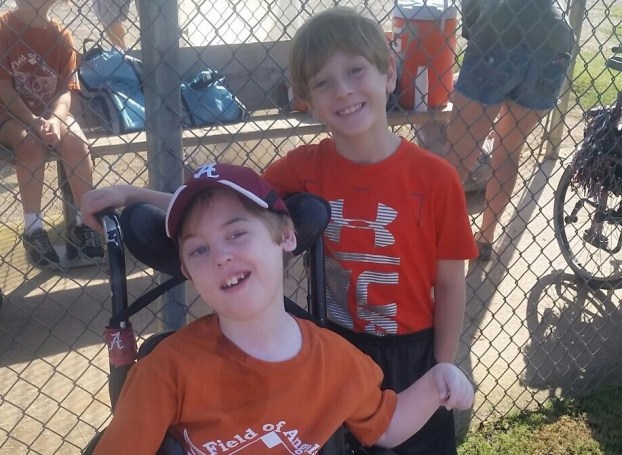 Connor Jacobs, left, pictured with his best friend Connor Herrero. Carly’s Clubhouse donated $10,000 to Pelham to be used to purchase wheelchair swings in honor of the two Connors. (Contributed)

PELHAM – A check for $10,000 from the nonprofit organization Carly’s Clubhouse was presented to the Pelham City Council at a meeting on Monday, Dec. 3.

Dustin Chandler, founder of Carly’s Clubhouse, said the donation was made in honor of the friendship formed between two boys named Connor – Connor Jacobs, who was diagnosed with cerebral palsy and died in 2015, and Connor Herrero, a boy whose desire to play with his best friend on a playground was never fulfilled.

Chandler requested that the money be used to purchase wheelchair swings to be placed alongside swings for typical children in the new playground that will be installed at Pelham City Park. In the city’s fiscal year 2019 budget, $50,000 was included to help cover costs related to building a new park. The playground will be constructed in partnership with Shelby County and the Alabaster-Pelham Rotary Club.

“The two Connors were best friends and they always wanted to play with each other on the playground but were never able to,” said Ashlea Herrero, Connor Herrero’s mother.

The boys became friends in the after-school program at Valley Elementary, said Jack Jacobs, father of Connor Jacobs. Connor Herrero would read books to his friend and always asked his mom to set up playdates for the two of them. Ashlea Herrero said it was a struggle to find a place where the boys could play together.

“Every child should be able to play side by side regardless of ability,” Chandler said. “Connor Jacobs, like most children, loved to swing, but that was something he was never able to do with his best friend.”

That’s the goal of Carly’s Clubhouse, named after Chandler’s daughter who is diagnosed with a rare disorder called CDKL5 that causes developmental delays. The idea is to build an inclusive playground in Pelham that brings together the special needs community with the able-bodied community.

“We must teach our young children that it’s OK to be in a wheelchair or be a little different,” Chandler said. “The best way for our children to learn about each other is through the art of play. We should allow our children to learn about each other in a true social setting. May Connor Jacobs forever be remembered for his contribution he made to society, not as a child with special needs, but a child who helped this important cause move forward.”

Chandler, Herrero and Jacobs thanked all of the people who have made donations to this effort and the city of Pelham for its support.

By ALEC ETHEREDGE | Sports Editor We had a strong slate of basketball games on Tuesday, Dec. 4, across Shelby... read more