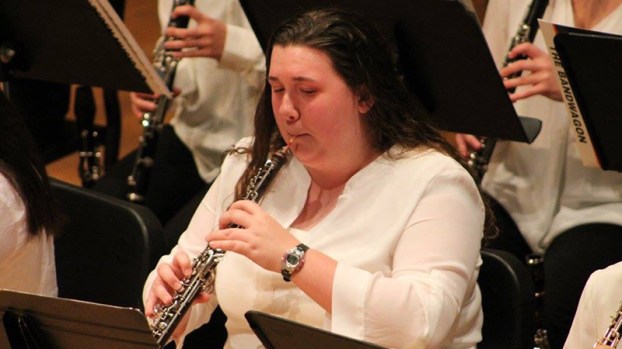 Rebecca Keith has been playing the oboe since the sixth grade. She continues to strive to learn as much as she can about the instrument. (Contributed)

ALABASTER – Thompson High School student Rebecca Keith loves to play the oboe. Since beginning lessons in the sixth grade, Keith, 17, strives to learn as much as she can about the instrument.

“There are always new things to learn about the oboe,” Keith said. “I have been taking lessons for almost seven years now and there is always something to learn.”

Keith was recently selected to represent Alabama at the National Association for Music Education’s All-National Honor Ensembles Band in Orlando.

After completing a video audition process in April, where she submitted a video of her playing the oboe, Keith was notified in July that she had been selected for the competition out of students from all over the United States.

“I was really shocked when I found out I had been selected,” Keith said. “I auditioned, but I wasn’t really expecting to get in.”

Keith is the first student selected from Thompson High School to attend the National Association for Music Education.

Once in Orlando, Keith spent much of her time rehearsing for the band’s performance, attended a leadership conference, visited the Magic Kingdom, and interacted with other music students.

“Sometimes going to music events can feel sort of lonely because you don’t really know a lot of people,” Keith said. “It felt great though to represent Thompson at the event, and I am hoping it will encourage more students at Thompson to try out for future years. It is a very competitive event, and can be intimidating to not necessarily know what you are up against, or what to expect, but I am really happy I went and participated.”

The event culminated with a concert, which was open to the public.

“It was a really neat experience,” Keith said. “We got the opportunity to perform, and that was a lot of fun.”

In addition to playing the oboe, she also plays the English Horn, and is currently a student of James Sullivan, the principal oboe of the Alabama Symphony.

The oboe is a double-reed woodwind instrument with a range that is a “little lower” than the flute.

In addition to her musical talents, Keith holds a 4.59 GPA, volunteers in school clubs and often spends time every Saturday morning volunteering in Alabaster at Manna Ministries, a 100 percent volunteer-run, weekly food outreach program, which serves about 200 families and other individuals in the community.

While Keith is unsure about her plans to pursue the oboe in the future, she is sure she would like to continue playing the instrument for as long as she can.

“I have really enjoyed learning about the oboe throughout the years,” Keith said. “It is such a unique instrument and I am always finding new and interesting things about it. It is something I can see myself playing in the future whether it be for a career or just for fun.”

By Emily Reed / Special to the Reporter ALABASTER – Alabaster Fire Station No. 1 is once again opening its Christmas... read more