COLUMBIANA – A 32-year-old Helena woman was arrested and charged with two counts of chemical endangerment of a child after allegedly exposing her newborn child to amphetamine and methamphetamine. 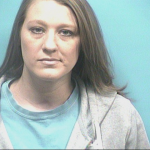 The Alabaster Police Department arrested Brittny Shae Carden, who lists an address in the 100 block of Bridgewater Drive in Helena, on Dec. 12, and charged her with two counts of felony chemical endangerment of a child and filed a motion to revoke bond stemming from two previous drug charges.

According to her arrest warrants, on Oct. 24, Carden allegedly “gave birth to the victim at Shelby Baptist Hospital Women’s Center where the victim’s meconium was sent off for testing and returned showing traces of an amphetamine and methamphetamine.”

Carden was previously arrested in April on possession of a controlled substance and possession of drug paraphernalia charges and had her bond revoked on Aug. 30 after failing to appear for a preliminary hearing.

Chemical endangerment of a child is a Class C felony, and is punishable by up to 10 years in prison for each count, according to Alabama law.

By GRAHAM BROOKS / Staff Writer HELENA – Plenty of local individuals and families that struggle to put food on... read more