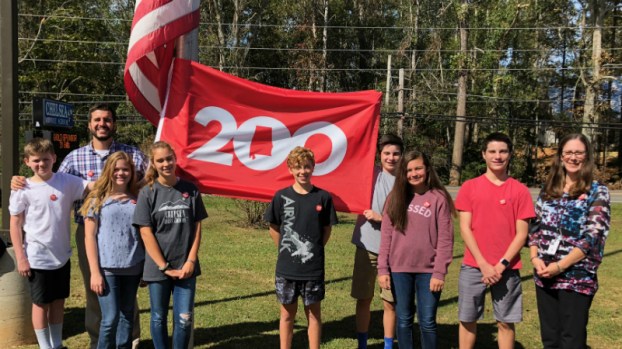 CHELSEA – Chelsea Middle School is partnering with the city of Chelsea and Chelsea Historical Society for projects that will help document the city’s history.

CMS seventh grade teacher Blake Lovett had been in touch with Chelsea Historical Society President Tony Nivens as the organization was founded, and school officials saw an opportunity to apply for Alabama Bicentennial School recognition.

“[School Principal Caroline] Obert had the idea that if we connect the two, we could have a really nice project,” Lovett said.

About 10 students are helping with the projects, including those from the Peer Helpers group and library aides who work with Media Center Specialist Rebecca Rayl.

“It started out bigger, but we realized we wanted students to be really involved and not just a little bit,” Rayl said.

The school applied for inclusion in the Bicentennial celebration and was one of 200 schools approved across the state. The designation allows for state grant money to be used for projects at the local level that commemorate Alabama’s history.

Obert, Lovett and Rayl attended a ceremony in Montgomery where the schools were recognized.

“That is an experience Blake or Rebecca or myself can never forget,” Obert said.

In late October, with funding from the state, Chelsea Middle School staff and students took a field trip to the Chelsea Museum to help meet needs including assembling shelves, locating hard-to-find resource books and photographing the museum and its collections.

The school also held a fall artifact drive. While the museum boasts an array of artifacts from the city’s early history, items that can help tell the story of modern life in Chelsea for future generations are surprisingly hard to come by.

As part of the effort to preserve the history of the Crane home in Chelsea, Nivens interviewed a Crane ancestor, and CMS students transcribed the interview. The notes could be helpful in seeking the home’s inclusion on the Alabama Historic Register.

A representative from the Alabama State Department meets with school officials quarterly about their progress, and at the end of the Bicentennial project, Chelsea Middle School and others will submit reports on their efforts, and three schools from each region will be named Bicentennial Schools of Excellence.

The Bicentennial program also provides professional development for teachers at the designated schools.

Lovett, a Chelsea native in his third year teaching at Chelsea Middle School, said preserving the city’s history is important to him.

“A big part of the project is making sure, as Chelsea continues to grow, that those who grew up here and those who have moved here don’t lose the knowledge about what it used to be like here for the people who built the city into what it is today,” Lovett said.

FROM STAFF REPORTS COLUMBIANA – The Shelby County School District is one of 25 districts in the state to receive... read more