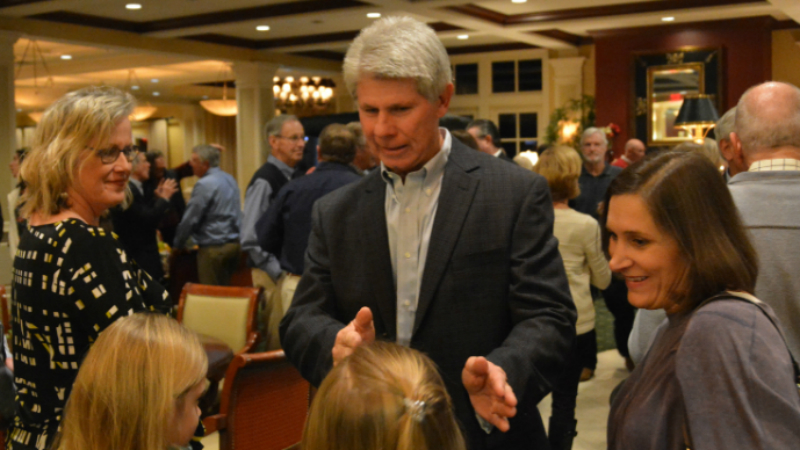 Many people wished Jerry Nixon, left, well in his retirement at a celebration on Wednesday, Dec. 19, 2018, at Inverness Country Club. (REPORTER PHOTO/STEPHEN DAWKINS)

NORTH SHELBY – Jerry Nixon did not think he would stay at Inverness Country Club for almost 41 years when he took the job as head tennis pro on Feb. 1, 1978, but he never tired of teaching and growing with the game.

“It’s been great,” Nixon said about serving as the club’s tennis director, as his position came to be called.

He started at the club after graduating from Shades Valley High School and playing tennis collegiately at Jefferson State Community College and Western Kentucky University.

During his time in college, Nixon taught lessons over a couple of summers at Lake Tahoe and in Hawaii.

“I guess it was kind of a natural progress, going from playing to teaching,” Nixon said. “I didn’t expect to do it forever, but it was easy to progress into that.”

He said he enjoyed everything about the job, from being around the sport to spending time outdoors and helping people improve—at all skill levels and from age 4 to over 80.

“When you see them able to do what you’ve gone over, it makes you feel good,” Nixon said.

Nixon’s early years at Inverness were during a “tennis boom” in the mid-1980s.

“It seemed like everybody was playing,” he said. “Every event you had was full. There’s a change in the way people spend their time now…people are so much busier. Later on, you had to plan and organize more to get people out to events.”

The game also changed dramatically during Nixon’s tenure at the country club, mostly because of increased strength and athleticism on the part of the players and better equipment at their disposal.

“The game is much more powerful now,” Nixon said. “It’s all about how hard you can hit it. When I played, we all served and volleyed, tried to get to net as quickly as possible. Now everybody stays back—it’s easier to get passed and harder to deal with power as you get closer, and people don’t work on the net game as much as they used to.”

Nixon was inducted into the Alabama Tennis Hall of Fame in 2010.

He is keeping his options open for his retirement.