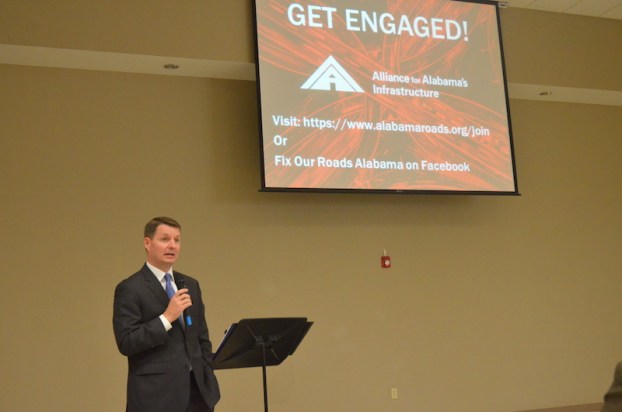 COLUMBIANA –Roads and bridges are critical to Alabama’s economic development, and the quality of life and safety of residents, Jim Page with the Alliance for Alabama’s Infrastructure said at The Shelby County Chamber Connections Luncheon on Thursday, Jan. 10.

The AAI advocates for the state investing in infrastructure, attendees learned at the first event held by The Shelby County Chamber, which resulted from the merger of the Greater Shelby and South Shelby chambers of commerce.

“We have Alabamians who die on our roadways every day from faulty road issues, and that’s something that can be fixed,” Page said.

Alabama has the fifth-lowest gas tax rate in the country at a flat rate of 18 cents per gallon, which was last increased in 1992.

The fuel tax is Alabama’s primary revenue source for transportation funding at about 80 percent.

Increased fuel efficiency has delivered a blow to road and bridge funding because vehicles can now travel farther using less gas, meaning fewer stops at the gas station to pay the state’s road-user fee. At the same time, inflation and increasing construction costs have further stressed the system.

A poll showed 59 percent of Alabamians are in favor of increasing the gas tax if accountability measures were in place.

“We have got to know where the money is going,” Page said.