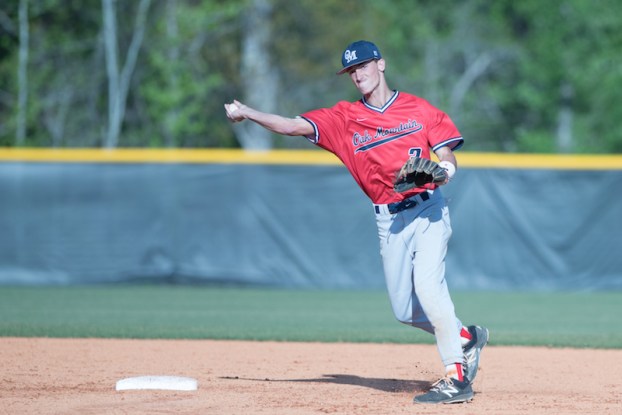 MILLBROOK – Opening day had a different feel for the Oak Mountain Eagles in 2019 than it did a season ago, which led to two wins against Stanhope Elmore by a combined 27-1 on Monday, Feb. 18.

The Eagles got a no-hitter from senior pitcher Jackson Kimbrell in his season debut to complete the two-game sweep with a 12-0 victory in game two, while Turner Hughes and Cole Sester combined to allow just one run and two hits in a 15-1 win to start the day.

Last year’s team jumped out to a 15-0 start, and became nationally ranked, but this year’s team is out to prove one point; and that’s to win a state championship. On opening day, the Eagles looked like they were sending a message, and each message is in a recap below.

While Hughes and Sester were obviously highlights on the mound, Oak Mountain showed it will have some pop in the bat this season as well, pounding out 14 hits in a 15-1 dominant effort to kick-start the 2019 season.

The Eagles put up four runs in the first, three runs in the second and seven in the third to take an early 14-0 commanding lead, before adding one more run in the fifth inning to close out the scoring.

Oak Mountain’s bats woke up earl in the first inning after Caleb Ragland picked up the first hit of the season with a double. That was followed by a sac fly from Landon Cato to drive in the first run of the game, while Ryan Reuse and Dylan Fraser added back-to-back singles after, the first of which drove in the second run of the game.

A fielder’s choice from Jake Rivers and an RBI-single from Jack Wilson closed out the four-run top of the first for Oak Mountain.

After a 1-2-3 inning defensively, Oak Mountain stepped back to the plate and quickly got going again with a one-out three-run homer from Reuse to quickly make it a 7-0 ballgame thanks to Kimbrell reaching on an error and Ragland picking up a walk.

But the best inning at the plate for the Eagles came in the top of the third. It started with a one-out triple from Luke Percer. After Kimbrell struck out, Oak Mountain was able to do all of its damage with two outs in the inning.

It started with an RBI-single from Ragland, then an RBI-double from Cato to make it 9-0. After a walk and an error drove in one more run, Rivers stepped to the plate and singled to center field to bring home two more. That was followed by a deep bomb over the left-field wall from Hughes to put the Eagles on top 14-0 at the end of three innings.

The Eagles added one more run in the top of the fifth off a Roberts single to answer Stanhope’s only run in the bottom of the fourth.

Reuse finished the game 2-for-2 with four RBIs to lead the Eagles, while Rivers went 1-for-3 with three RBIs. Hughes and Cato both added two RBIs, while Oak Mountain had 11 different players pick up a hit and seven with at least one RBI.

Hughes tossed 3.2 innings allowing two hits and one run, while striking out six and Sester added 1.1 innings in relieve striking out three.

Kimbrell was easily the highlight of the second game starting the season off showing why he’s considered one of the best pitchers in the state by tossing a no-hitter. He went all five innings striking out 14, while allowing just one walk to keep him for a perfect game.

While his performance on the mound was obviously special, so were the Oak Mountain bats yet again.

The first three innings were yet again key for the Eagles, as they put up one in the first, five in the second and six in the third to account for all 12 of their runs on 10 hits.

The first run of the game came on a groundout from Cato, but thanks to great base running from Ragland, he was able to cross the plate to give the Eagles an early 1-0 advantage.

After an error and two consecutive walks loaded the bases with two outs in the top of the second, Ragland drove in two runs for a 2-0 lead before Cato stepped to the plate with the bases juiced.

In a 1-2 count, Cato drove the next pitch he saw deep and over the left field wall for a grand slam to put Oak Mountain on top 6-0 through two innings.

Before there was even an out in the top of the third, Oak Mountain was able to load the bases behind a hit batter and back-to-back singles. That was followed by back-to-back bases loaded walks from Wilson and Percer to bring two runs home, before Kimbrell singled to bring in two more runs.

The Eagles added another run on a Blake Sandidge single, while Fraser drove in the 12th and final run with a sac fly.

Cato finished the game 1-for-2 at the plate with five RBIs, while Ragland went 2-for-4 with two runs scored and an RBI. Nine different players picked up a hit in the game, while six had RBIs.