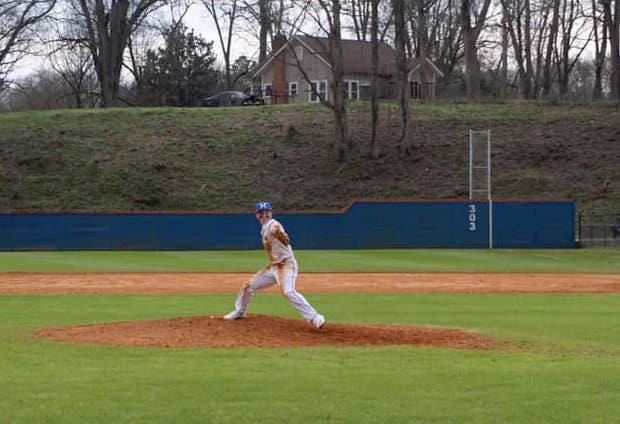 Josh Mims threw a no-hitter for Montevallo on Monday, Feb. 18, as the Bulldogs opened the 2019 season with a 10-0 win against Vincent. (Contributed)

MONTEVALLO – Josh Mims was revved up and ready to go on opening day for the Montevallo Bulldogs’ baseball team, as they played host to the Vincent Yellow Jackets on Monday, Feb. 18.

While the game was played a day earlier than expected because of rain forecasted, Mims wasn’t the least bit off and ended up throwing a no-hitter to help lead Montevallo to a 10-0 run-rule victory to kick off the 2019 season.

Mims allowed just one walk in the game to prevent a perfect game, but he tossed five incredible innings that included seven strikeouts to pick up the no-hitter on just 60 pitches.

It also didn’t hurt that his offense helped give him some cushion to work with totaling 12 hits and 10 runs in the shortened five-inning game.

It was actually a pretty quiet game through the first two innings, but Montevallo was able to strike first in the bottom of the first thanks to an RBI-single to left field from Clay Colley to score Grant Cordes. It actually marked the fourth single of the inning, but due to a base runner caught stealing and two outs already on the board, that’s all the Bulldogs could manage.

The next scoring opportunity came in the third inning. Thanks to back-to-back errors, a walk and a wild pitch, the Bulldogs were able to put up one run through three at bats.

That quickly became a difference in the game.

After a sacrifice bunt one batter later led to led to the third run crossing the plate, Baxley Shores stepped to the plate and hit a bases-clearing triple to give Montevallo a 4-0 lead.

The Bulldogs added another run on an RBI-single from Robbie Gallagher, while a balk allowed a sixth run to cross the plate before the inning came to an end.

With Mims pitching lights out on the mound, that was just the beginning.

An inning later, Montevallo came back to the plate ready to add to its lead. The Bulldogs got a single from Cody Posey and a double from Cordes with one out in the inning. That was followed by a fielder’s choice that allowed Posey to score.

A single from Shores during the next at bat plus an error on a hit from Jay Dreyer allowed two more runs to cross the plate for a 9-0 lead through four innings.

One run away from ending the game due to the 10-run rule, Montevallo used two singles and a walk to load the bases in the bottom of the fifth, before a passed ball allowed Daniel Whitson to score the final run of the 10-0 victory.

By ALEC ETHEREDGE | Sports Editor  CALERA – Nobody had a more thrilling opening day than the Calera baseball team,... read more