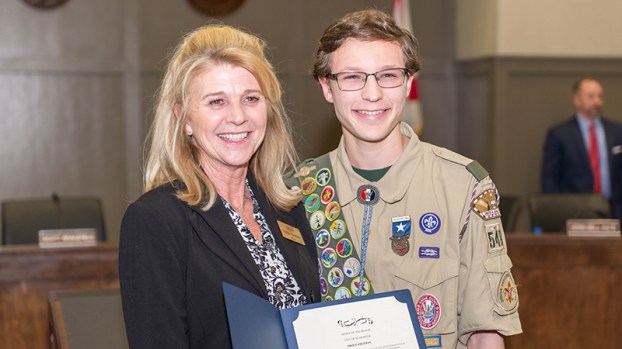 ALABASTER – Buck Creek Park has a new addition thanks to the work of a local Eagle Scout, and his efforts recently earned him praise from the Alabaster’s leaders during a City Council meeting.

During a Feb. 18 meeting, Alabaster Mayor Marty Handlon presented a proclamation honoring Eagle Scout Trey Woodall, a member of the Alabaster-based Troop 548, for earning the highest honor in Scouting while also benefiting his community.

“The Eagle Scout Award Distinction will follow Trey throughout life, and will be a beacon to others of his leadership quality and the commitment this young man has shown,” Handlon said while reading a proclamation in Woodall’s honor. “I recognize Eagle Scout Trey Woodall for his highest honor earned, and encouraged him to continue his commitment to excellence.”

Handlon said Woodall exemplifies the Boy Scouts of America’s core values of honor, loyalty, courage, cheerfulness and dedication, and praised him for earning 36 merit badges and the highest Scouting honor at the young age of 16.

During his time with Troop 548, Woodall has held the offices of den chief, patrol leader, senior patrol leader and junior assistant scoutmaster, in addition to completing High Adventure Scout Camps at Philmont and the Summit.

Woodall is also a member of Future Teachers of Alabama at Thompson High School, and enjoys playing the piano and reading.

“It’s a very special place for our community, and many people enjoy it. You have made it all the more enjoyable, and we thank you for investing in that,” Handlon said of Woodall’s project at Buck Creek Park.