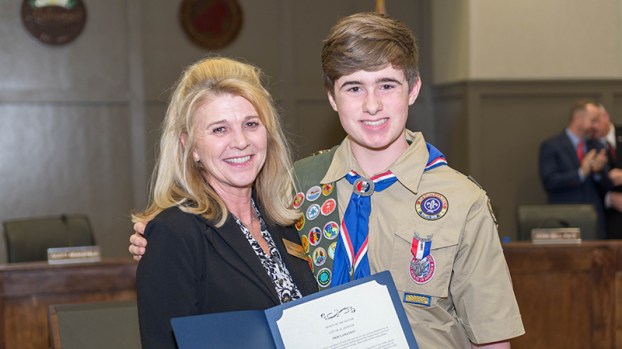 ALABASTER – The City Council meeting on the night of Feb. 18 was much more crowded than usual, as dozens of visitors showed up to support the accomplishments of two local Eagle Scouts.

Among those honored was Ethan Scales, who, at the age of only 15, has earned the highest scouting honor while staying involved in a gamut of other community activities.

Scales, a member of the Alabaster-based Boy Scout Troop 548, earned plenty of praise from Alabaster Mayor Marty Handlon during the meeting.

“The Eagle Scout Award Distinction will follow Ethan throughout life, and will be a beacon to others of his leadership quality and the commitment this young man has shown,” Handlon said while reading a proclamation in Scales’ honor. “I recognize Eagle Scout Nathan Scales for his highest honor earned, and encouraged him to continue his commitment to excellence.”

Handlon said Scales exemplifies the Boy Scouts of America’s core values of honor, loyalty, courage, cheerfulness and dedication, and praised him for earning 25 merit badges and the highest Scouting honor at such a young age.

Though his Eagle Scout community project, Scales planned, organized and executed a project to construct a multi-purpose outdoor gathering area on the grounds of St. Thomas the Apostle Catholic Church in Montevallo.

During his time with Troop 548, Scales has held the offices of scribe, quartermaster, patrol leader, assistant senior patrol leader and Order of the Arrow, in addition to completing High Adventure Scout Camp at the Summit.

Scales is also an active member of his church, and is on the drumline of Thompson High School’s Marching Southern Sounds.

By NEAL WAGNER / Managing Editor ALABASTER – Buck Creek Park has a new addition thanks to the work of... read more