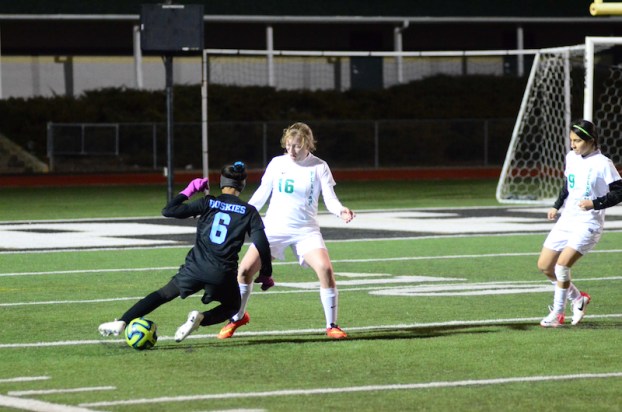 The Helena and Pelham soccer programs are selling Battle of the Paws T-shirts prior to the rivalry games to help benefit Two-by-Two Animal Rescue. (File)

Once Helena moved up to the 6A classification in 2016, the two soccer programs have met each year since in the “Battle of the Paws” rivalry.

This year, the two programs are selling Battle of the Paws custom T-shirts to help benefit Two-by-Two Animal Rescue.

The shirts are $15 and order forms are available between now and Feb. 28 as a portion of the proceeds will be donated to Two-by-Two Animal Rescue.

The shirts are being sold prior to the Helena-Pelham soccer games March 7-8 as students and fans are encouraged to wear the shirts to any of the middle school, freshmen, junior varsity or varsity games in Helena.

The Helena-Pelham girls soccer teams are set to play Thursday, March 7 beginning at 4 p.m. with the freshmen game, followed by the girls junior varsity at 5:30 p.m. and the varsity game at 7 p.m.

The Helena-Pelham boys soccer teams are set to play Friday, March 8 beginning at 4:30 p.m. with the middle school game, followed by the boys junior varsity at 5:30 p.m. and the varsity game at 7 p.m.

The rivalry series began in 2016 as the boys have traded a trophy back and forth each year. The Pelham boys have won two of the last three years with Helena holding the trophy now after last year’s win. The girls did not play in 2016, but are currently split with one win each with Pelham being last year’s winner.

Two-by-Two Animal Rescue is a 501 C (3) no-profit, no-kill organization. Two-by-Two began in 2002 when Sonya Smith began feeding strays in Old Town Helena, according to their website.

Those interested in purchasing a shirt should visit Docs.google.com/forms/d/e/1FAIpQLScgoImwHe_b5mSrh4d5feCmkWMovvdu2ZKRXTaR_t2PQBQnJw/viewform.