COLUMBIANA – A 37-year-old Maylene man was sentenced to more than two years in prison and must complete a domestic violence intervention program after he pleaded guilty recently to punching, choking and throwing household objects at a victim in 2016. 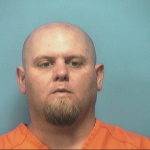 William McGee, who lists an address on Shelby County 260 in Maylene and has two previous felony charges on his record, pleaded guilty on Feb. 8 to one count of domestic violence by strangulation or suffocation, and was sentenced by Shelby County Circuit Court Judge William Bostick to 869 days in prison followed by two years of supervised probation.

McGee received 869 jays of jail credit for time served in the Shelby County Jail prior to his guilty plea. Through a plea agreement, a third-degree domestic violence charge was dropped against McGee.

A stipulation of his sentence requires him to complete a batterers’ intervention program with Project SAFE in Birmingham.

On April 25, 2016, McGee was arrested and charged with using abusive language toward the victim. When he was released from the Shelby County Jail on a $2,000 bond the same day he was arrested, his bond stipulated he have no contact with the victim.

According to his arrest warrants, McGee violated the conditions of his bond when he had contact with the victim on Sept. 19, 2016. During the incident, he choked the victim, punched her in the face multiple times, knocked her over and threw household items at her.

PELHAM – At Pelham City Council meeting on Monday, Feb. 18, the council approved a contract with Gonzalez-Strength and Associates... read more