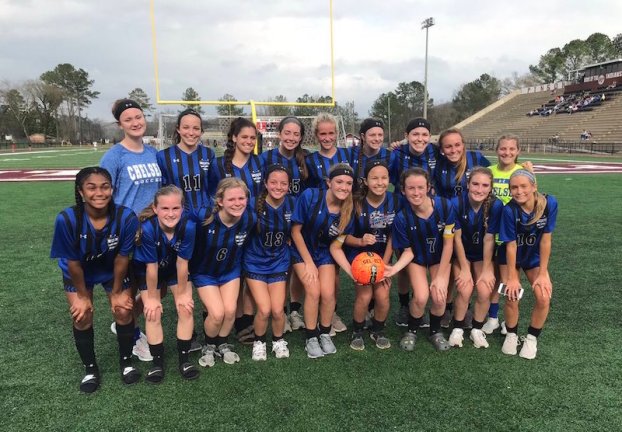 It’s been an impressive start to the 2019 soccer season for the Class 6A preseason No. 1 Chelsea girls soccer team, and despite now being ranked No. 2 in the standings, the Hornets are now off to a 5-0 start after finishing the 2019 Lakeshore Gold Division undefeated by sweeping three games to claim the championship.

Competing in a bracket featuring two other top 11 teams, including No. 11 Fort Payne and No. 4 Northview, as well as Trinity Presbyterian, the Hornets were able to take down all three opponents by a score of 3-1 or 3-0 to claim a perfect 27 points on the 10-point system.

In a 10-point system, each win is worth six points, a tie worth three points, a loss worth no points, and then each goal is worth one point up to three goals.

In the first game of the tournament on Friday, Feb. 22, the Hornets took on Fort Payne and kicked off their consistent effort with a strong 3-1 showing to claim a quick nine points in the tournament.

On the same day, Chelsea’s second game featured a matchup against undefeated Northview, who had outscored its first three opponents 14-2.

The Hornets, however, were ready to go and for the second time in the same day took down a ranked opponent by a final score of 3-1 to claim nine more points for 18 through the first day of the tournament.

Heading to the final day of the tournament on Saturday, Feb. 23, Chelsea just had to win or tie against Trinity to pull off the gold division championship.

With a loss, there was still an outside chance for Northview and Trinity to pull off a tie with Chelsea at 18 points, while a 2-0 loss by the Hornets would have resulted in a win for Trinity in the tournament.

Chelsea is one of the best teams in the state for a reason though, and the Hornets closed the tournament out like it. They ended up posting three more goals for the third game in a row, while posting their first shutout of the tournament to pick up nine more points for 27, which was more than enough to claim the championship.

Through five games, Chelsea has beaten four ranked teams and is now outscoring opponents 20-2 with three shutouts to prove themselves as a strong contender early in the season.

Claire Guillen, Lexie Duca and Haley Duca were named to the all-tournament team, while Lexie earned the honor of being named the tournament MVP.

By ALEC ETHEREDGE | Sports Editor  Competing in the Platinum Division of the 2019 Lakeshore Shootout between Thursday, Feb. 21,... read more