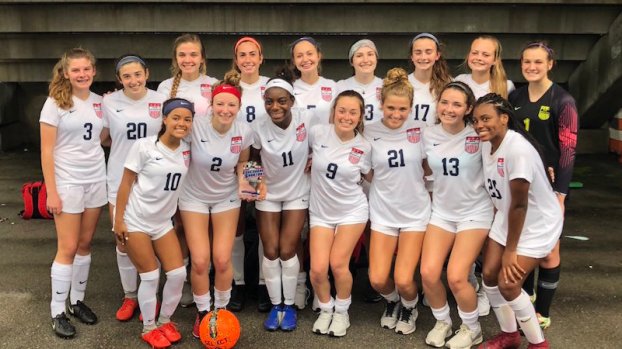 Competing in the Platinum Division of the 2019 Lakeshore Shootout between Thursday, Feb. 21, and Saturday, Feb. 23, the Oak Mountain girls soccer team was competing in a six-team bracket featuring five teams in the top 12 and four in the top six of the 7A rankings, but at the end of the day on Saturday, none of that mattered.

The Eagles stormed through their bracket beating No. 4 McGill-Toolen, Auburn and No. 6 Bob Jones to finish the weekend undefeated on a 10-point system to win the 2019 Platinum Division of the Lakeshore Shootout for the third consecutive year.

In a 10-point system, each win is worth six points, a tie worth three points, a loss worth no points, and then each goal is worth one point up to three goals.

Oak Mountain’s tournament started with a matchup against McGill-Toolen at Pelham High School on Thursday, Feb. 21, and the Eagles didn’t disappoint against the No. 4 team in the state.

No. 2 Oak Mountain, who had already beaten two top-10 teams coming into the tournament, showed a continued dominance on both ends of the field. The Eagles put up six goals in the matchup with McGill-Toolen and gave up just one goal to win an easy 6-1 game.

On day two of the tournament, Oak Mountain got a matchup against an 0-4 Auburn team, but still a dangerous team that had played a difficult schedule.

Auburn’s offensive struggles, however, met up with the Eagles’ strong defense and an offense that wasn’t going to make it a defensive battle. Oak Mountain put up four more goals in the matchup to pull away for a 4-0 shutout victory.

To that point in the tournament, the Eagles had a perfect 18 points on the board thanks to grabbing a maximum of nine points in each of their first two matchups.

Oak Mountain went into its final matchup against No. 6 Bob Jones needing a win or tie to guarantee the championship, not because of the opponent they were playing, but because of the success of James Clemens in the tournament.

James Clemens had gone 1-0-1 through the first two days of the tourney, tying with Thompson, and had posted 12 points. There was an outside chance with a win that James Clemens could pull off the comeback victory if the Eagles lost on that final day.

Oak Mountain, however, came back for another strong effort against Bob Jones on the final day.

After a somewhat slow start, the Eagles were able to use a strong second half for another shutout victory by a final score of 3-0. With James Clemens picking up a 1-0 victory, an Oak Mountain loss would have given them the title, but the Eagles did what they needed to do to close out it.

Through five games this season, Oak Mountain is now 5-0, the No. 2 team in the state and has outscored opponents 25-2, with four of those five opponents being top-nine teams. In the Lakeshore Shootout alone, the Eagles outscored their three opponents 13-1.