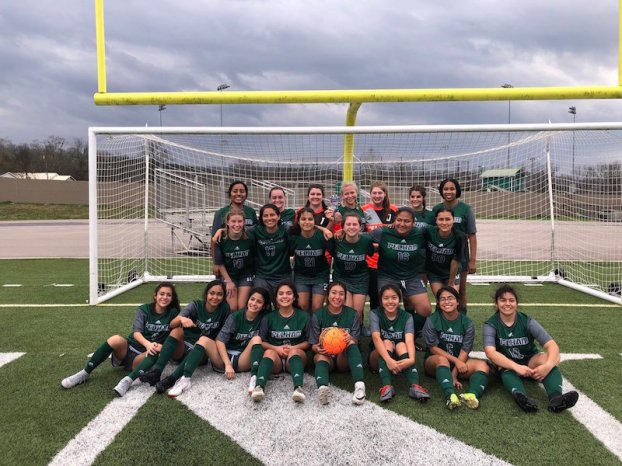 The Pelham girls soccer team got redemption for last year's loss to Mortimer Jordan in the Lakeshore Shootout Bronze championship game by taking down the Blue Devils to claim this year's championship. (Contributed)

Last year marked an incredible turn around for the Pelham Panthers’ girls soccer team, and the beginning of 2019 season has been no different featuring a team that not only looks like it’s trying to top last year’s success, but turn into a state championship contender.

Competing in the Bronze Division of the 2019 Lakeshore Shootout featuring a difficult path of 10 teams, the Panthers looked strong from start to finish to claim the championship at the end of the day on Saturday, Feb. 23.

Unlike the other three divisions, Pelham not only had to play three games based on the 10-point system, but also had to play in a championship game against Mortimer Jordan to close out the title.

Pelham started the week on Friday, Feb. 22, against both Pickens High School from Georgia and Oneonta.

While the first game featured an out of state opponent, it was the second game that was the thrilling one. The Panthers handled their first matchup with Pickens with some ease thanks to a 4-0 shutout.

The night cap against Oneonta, however, featured a much tougher game and a great atmosphere. Pelham, however, was able to pull away for a 4-2 victory to start the tournament 2-0.

The Panthers then got a break until the next morning, but found themselves in a great situation and a win away from making it to the championship game.

Pelham woke up the next morning and returned to the field ready to go and picked up another win against Oxford to pick up 29 points at the end of the first three games of the tournament.

That equaled the total output Mortimer Jordan had put up as well, but no other team even came close to that number matching those two up against each other in the championship game.

In that championship game, Pelham was able to take advantage of some great momentum early in the season to pull off a sixth consecutive victory to start the 2019 season and get redemption to claim the 2019 Bronze Division of the Lakeshore Shootout.