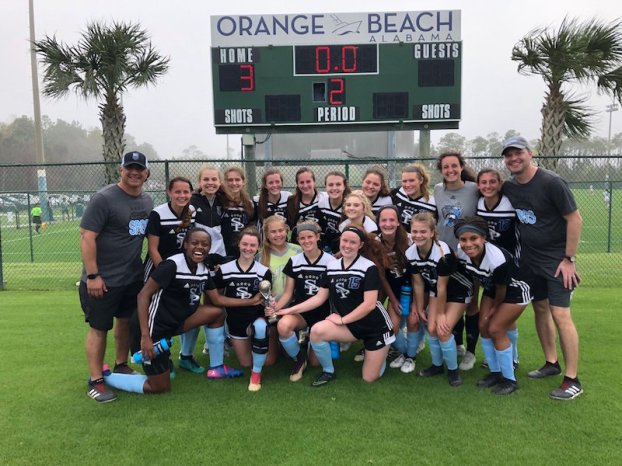 Spain Park's girls soccer team had a dominant run at the 2019 Island Cup to bring home the championship after a 3-0 win against Huntsville in the title game. (Contributed)

ORANGE BEACH – After an opening-night 8-1 loss to Oak Mountain for Spain Park’s girls soccer team, the Jags were faced with a decision, either doubt your talent or bounce back knowing your much better than what was shown in that first game.

Not only did the Jaguars bounce back with a 4-0 shutout victory against Thompson on Feb. 19, but between Friday, Feb. 22, and Saturday, Feb. 23, they reeled off four consecutive wins by a combined 28-1 to claim the 2019 Island Cup championship held in Orange Beach.

The Jags dominated their four opponents, allowing just one goal and scoring at least three in every matchup, while also shutting out three of their opponents.

Spain Park’s first game of the week featured a matchup against Austin High School, and the Jags not only left no doubt in the game, but set the tone for the week with a 9-1 victory thanks to strong play from Hannah Horton, Haley Greene and Marybeth O’Bryant.

With the win, Spain Park continued play in the winner’s bracket and took on Robertsdale later that same day. This time around, the Jags didn’t bat an eye in mercy-ruling Robertsdale by a final score of 10-0.

They took a 6-0 lead at the half, and then early in the second half got a hat-trick goal and then a fourth goal from Greene, before Brooke Savage pushed the final goal across to complete the 10-0 victory.

Those two victories on the first day set up a semifinal game for the Jaguars against Austin for the second time in the tournament.

While they didn’t score the nine goals they did in the first half, the defense and goaltending continued to be impressive.

Spain Park didn’t allow a goal for the second consecutive games and got six more goals thanks to two apiece from Jasmine Greene and Haley Greene, as well as one apiece from Madison Schiff and Horton.

With both defenses having given up just one goal in the first three games, the championship game was sure to be a hard-fought battle with more defense.

Spain Park’s offense, however, was just slightly better throughout the tournament, and that made the difference in the final game.

In the first half, the Jags were able to continue an unbelievable defensive effort in the tournament and one goal made the difference, as they took a 1-0 advantage into the halftime break.

One more goal was likely going to be enough, as Spain Park had only given one goal in the entire tournament to that point and most likely wasn’t going to give up more than that in the second half of this one.

The Jags not only added that important second goal, but was able to get a third goal from eighth grader Madison Davis to close out the championship game with a 3-0 victory.

Overall, the 28 goals scored were impressive, but the defensive effort featuring three shutouts and just one goal allowed, was what was astonishing. It was an all-around flawless performance from start to finish, as the Jags are now 5-1 overall.